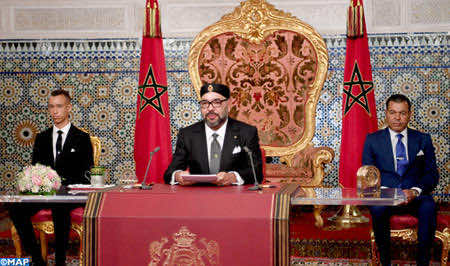 Speaking on the 65th anniversary of the Revolution of the King and People, the King said that Morocco’s rising number of unemployed youth is one of the biggest impediments to the realization of the aspirations and development projects the North African country has heavily invested in for the past decade.

Describing Morocco’s youth as “the country’s true wealth,” the King promised that despite major obstacles to come, “we seek to rise to the challenge of completing the construction of modern Morocco; a revolution through which we aim to give Moroccans the place they deserve in life, especially our young people.”

The King instructed the government to devise an “integrated strategy” to upgrade education and training in Moroccan universities and vocational schools and create an attractive work environment for foreign-educated Moroccan youth to return home.

Achieving such goals requires that there be incentives to convince young people to be drivers and actors in the country’s march towards further political stability and economic prosperity.

“We cannot ask young people to do their duty without making sure they have the necessary qualifications and opportunities,” he said. The King promised that the social inclusion aspect of the new development model would ensure quality eructation and better job prospects.

The King also said that the deepening youth unemployment is “a deeply concerning matter” that requires the government to “enhance their confidence and give them hope in the future.”

An extension of the Throne Day speech

The King emphasized the social inclusion and effective public administration spirit of the Throne Day speech he gave on July 29.

“As an extension of the orientations outlined in my Throne Day speech, we have to urgently draw attention to youth employment, namely training and educational system. We can no longer accept that our education system continue to function like an unemployment -producing machine.”

The King called on education authorities, job creators, and political actors to create an environment that reduces the growing disconnect between graduates’ skills and labor market demands, but also promotes the creation of small and medium-level businesses and self-employed graduates.

“Youth issues are not restricted to training and employment opportunities. They also involve a broadening of intellectual horizons, mental well-being and improved health standards.”

The king’s remarks on the dire situation of Morocco’s youth come amid reports of desperation and socio-economic frustration among young Moroccans due to inadequate development programs, a failing education model, and sluggish economic activities.

Ahmed Lahlimi, the head of the High Commission for Planning (HCP), Morocco’s leading planning and economic forecasting institution, told Reuters earlier this month that one-third of Moroccan graduates are unemployed.

Lahlimi slammed slow economic growth and the underperforming education system as the two main reasons for the country’s labor market’s failure to absorb the increasing number of jobless Moroccan youth.