Rabat - The spokesperson for the Libyan National Army (LNA), Ahmed al-Mismari, has accused Arab media of exploiting his commander’s remarks on Algeria. 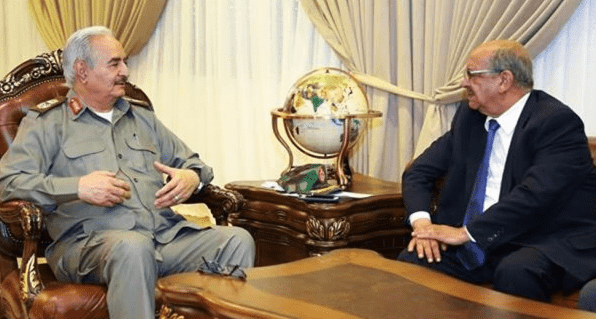 Rabat – The spokesperson for the Libyan National Army (LNA), Ahmed al-Mismari, has accused Arab media of exploiting his commander’s remarks on Algeria.

During his phone call, Siala distanced his country’s stance from Haftar’s statements, stressing Libya’s commitment to maintain historical and strong relations between the brotherly people.

Today, Algerian news outlets quoted the spokesperson of the LNA, saying that Algeria and Libya are countries with a “common destiny.”

Sputnik News also reported on the spokesperson’s press conference on Monday to denounce the video published by Al Jazeera.

Al-Mismari said in his press conference that Algeria and Libya are brother countries with a “common destiny.”

Tension between Algeria and Haftar is not new. In 2014, the official allegedly accused Algeria of attempting to seize Libya’s wealth.

In May, a United Nations-sponsored summit convened Libya’s Chief of Staff Marshall Khalifa Haftar, Speaker of the Libyan House of Representatives in Tobruk Aguila Saleh, Chairman of the Presidential Council of Libya Fayez al-Sarraj, and President of Libya High Council Khaled Mechri.

The meeting, which marked Morocco’s participation, aimed to discuss ways to end the Libyan crisis.

During the conference, the Libyan officials agreed to work with the UN to hold “credible and peaceful elections on December 10 and to respect the results of the elections.”

The ongoing crisis in Libya started in 2011 after the Arab Spring protests which caused a civil war and resulted in the death of long-time Libyan leader Muammar Gaddafi.

The power vacuum caused instability in the country.