Rabat- Scientists have discovered a 90,000 year-old bone-knife made from an animal rib in Morocco.

Rabat- Scientists have discovered a 90,000 year-old bone-knife made from an animal rib in Morocco.

The bone tool, recovered in 2012 in the Dar es-Soltan 1 cave south of Rabat, is the oldest tool to have been shaped and used as a knife by the Aterian culture from the Middle Stone Age in North Africa, announced the Ministry of Culture and Communication on October 3.

According to Natural History Museum, the bone, 13 centimeters long, came from a large mammal and had been shaped and sharpened for cutting soft material.

“This find is significant because it shows how sophisticated bone tool technology was already around about 100, 000 years ago … It also shows the existence of a new type of bone tool, with no other example in the rest of Africa,” said researcher and scientist Silvia Bello from Oxford University.

Moroccan scientist Abdeljalil Bouzouggar from the National Institute of Science and Technology (INSAP) suggested that “Aterians made specialised bone tools earlier than originally believed and more than 40,000 years before the Neanderthals.” 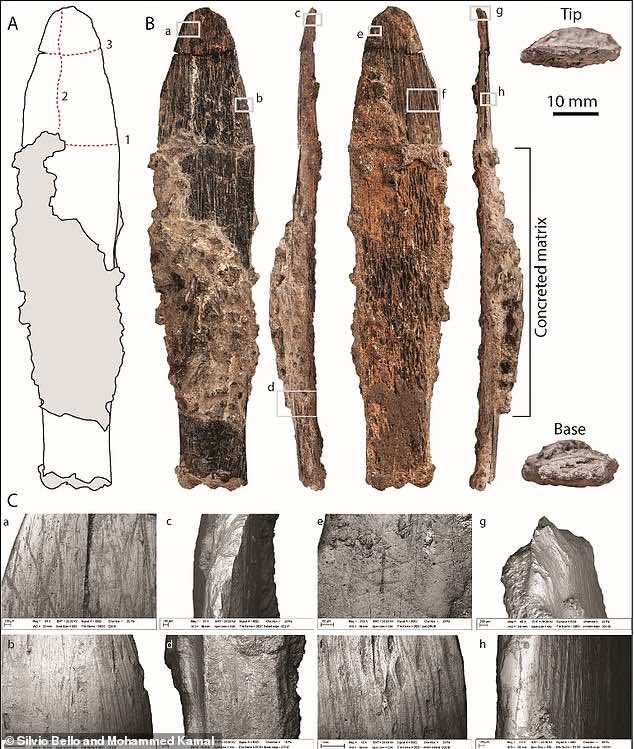 According to the scientific journal PLOS One: “This tool and the technology used to create it are distinct from bone tools of similar age in southern Africa but similar to two tools known from the El Mnasra cave site in Morocco which is also of similar age.”

One of the latest published scientific discoveries in Morocco came in March.

Along with Bello and Bouzouggar, an international team of researchers from Rabat’s INSAP and the Oxford University Museum of Natural History, including Louise Humphrey and Simon Parfitt, found the artefact.

An international team of researchers sequenced the DNA from Homo sapiens in Morocco dating to approximately 15,000 years ago in Grotte des Pigeons, in northeast Morocco near Oujda.

The Homo sapiens, dating to the Late Stone Age, had a genetic heritage similar to both Near Eastern populations and sub-Saharan African populations.

In June 2017, 300,000 year-old fossils of the oldest-known remains of Homo sapiens were also found in Morocco, suggesting that Homo sapiens evolved in various locations across Africa.