The World Food Program’s aid will reach 14 million people at risk of famine in Yemen.

In a statement released on Thursday, the organization said, “WFP food and other humanitarian support has been instrumental in helping to prevent famine, but the indications are that even greater efforts will be needed to avert mass starvation.”

According to the WFP, the projected aid expansion will include both food supplies and cash-based transfers.

The United Nations describes Yemen as the largest hunger crisis in the world with millions of people on the brink of famine in a situation that is worsening each day.

Over the past week, escalating attacks from the Saudi-led coalition, which has been supported by the US, have exacerbated the humanitarian crisis in Yemen. Attacks in the rebel Houthi-held city of Hodeidah are hurting the main humanitarian lifelines to Yemen.

Due to the ongoing offensive, Yemen peace talks will be pushed off until “the end of the year” according to UN Special Envoy for Yemen Martin Griffiths.

In response to the escalated attacks, UN Secretary-General Antonio Guterres told reporters, “Yemen today stands on a precipice. On the humanitarian side, the situation is desperate. We must do all we can to prevent the already dire conditions from deteriorating.” 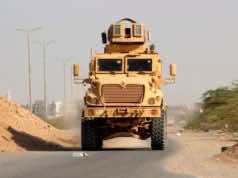