Rabat – Hundreds of protesters held demonstrations against Saudi Crown Prince Mohammed bin Salman’s arrival in Tunisia on Tuesday. The protests targeted MBS for his alleged involvement in the killing of Jamal Khashoggi in the Saudi consulate in Istanbul on October 2.

The demonstrations took place in the Habib Bourguiba Avenue, the famous site of Tunisian protests during the Arab Spring.

On Monday the Tunisian Journalists Syndicate released a statement referring to the crown prince as a “true enemy of freedom of expression.” The organization also announced plans to file a lawsuit against MBS for war crimes in Yemen.

A banner reading “No to the desecration of Tunisia, the land of the revolution,” hung from the Journalists Syndicate headquarters.

Civil activist Emna Mizouni stated in an interview, “Everyone is against whitewashing oppression. Unfortunately, our Arab brothers could not organise similar protests.” Mizouni stated that Tunisians were demonstrating “in the name of all oppressed Arab people” who did not have the privileges of organized public protest.

The demonstrations included civil activists as well as artists and street performers, who mocked the Saudi crown prince’s war in Yemen through satirical performances.

Hamza Nasri, a mime artist portraying MBS in a street performance, stated, “Simply said, we came here today to say that the Tunisian people – who have exported the revolution to the rest of the Arab world and who fought for justice, dignity and human rights – cannot welcome a criminal like bin Salman.” 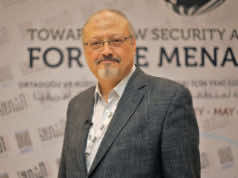 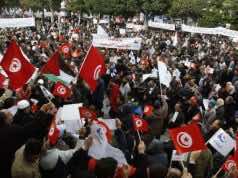 Activists and Politicians to Protest Against MBS’ Visit to Tunisia 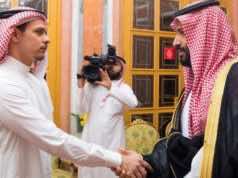