Members of a Moroccan criminal network suspected of secretly butchering stray dogs in order to sell their meat stood in court for their trial on Monday.

By
Ahlam Ben Saga
-
Ahlam Ben Saga is a Cultural Studies graduate from university Mohammed V of Literature and Humanities in Rabat.
Dec 3, 2018
Spread the love

Rabat – On Monday, the Casablanca Court of First Instance adjourned the trial of seven individuals suspected of supplying dog meat to markets and small fast food shops in Mohammedia, a city near Casablanca.

The suspects’ family members were present at the trial, along with a few human rights activists who decried, amid heated debates between the defense and the prosecution, the crime committed against consumers and their health.

The judge adjourned the trial to allow the defense more time to prepare.

Last week, the Royal Gendarmerie forces in the region dismantled the ring after they caught three of them promoting rotten beef from diseased cattle in addition to dog meat.

The gendarmes found and seized sharp weapons and meat grinders found in the possession of the individuals.

News of the suspects act has shocked and disgusted Moroccans, who expressed anger on social media. Some called on the court to hand down severe penalties to the suspects for threatening health, while others condemned the heinous acts against stray dogs.

Murder of stray dogs is not uncommon in Morocco, and the reasons vary.

Some of the recent publicized acts of violence took place in April, when dozens of stray dogs were shot in the coastal city of Agadir ahead of a visit by the FIFA 2026 Bid Evaluation Task Force, which was meant to determine  Morocco’s eligibility to host the 2026 World Cup.

Photos and videos of the “gruesome incident” made international headlines, both shocking and angering people.

Animals continue to be vulnerable to acts of violence, and there is not a law that punishes the abuse. It remains to be seen whether Morocco will enact legal punishments for cruelty and inhumanity towards animals. 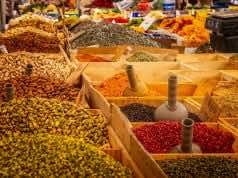