Over the weekend, Algeria witnessed the brutal murders of two students, one Zimbabwean and one Algerian.

Two unknown individuals reportedly slit Belatla’s throat in his dorm room at the university campus of Taleb-Abderrahmane-2 of Ben Akhnoun in Algiers province. The attackers stole his car keys and left a homophobic message on the wall.

Belatla’s friends found him dead in his dorm room on Sunday evening, February 10. On the wall, his murderers wrote in English with his blood: “He’s gay.”

Belatla, originally from Bordj Bou Arreridj in Algiers province, was in his third year at the faculty of medicine.

Belatla’s brutal murder has sparked the condemnation of his fellow medical students who boycotted classes, organized protests in front of the faculty buildings, and called for more security on the campus.

“We demand strong security in the capus, so that not anyone can randomly come and go,” one student at the faculty agitatedly told Algerian media.

Another one stated: “He was one of us, our brother. People enter without student ID cards. What happened to [Belatla] could have happened to any of us in the campus.”

People have also taken to social media to express disgust at the homophobic message.

The incident is reminiscent of the murder of Prosper Nduzso, 22, a Zimbabwean senior electronics student in Sidi Amar, Annaba, a town in north eastern Algeria, over the weekend.

Nduzso was stabbed to death in the chest and leg by three Algerian men when he was on his way to a market. When the student’s friends reported the incident to the police, they took a long time to get to the crime scene.

Sub-Saharan Africans led peaceful protests in Algeria to condemn the murder and how it was treated with indifference and racism by authorities. 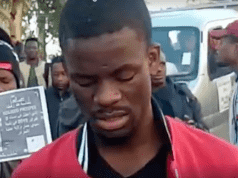