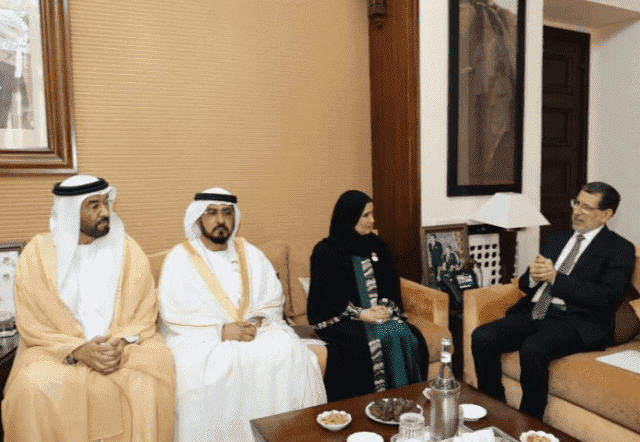 Rabat – In a meeting with Moroccan Head of Government Saad Eddine El Othmani in Rabat on Monday, the director of the UAE’s Federal National Council, Amal Bin Abdullah Al Qubaisi, reaffirmed her country’s unwavering support for Morocco’s territorial integrity with regard to Western Sahara.

The official’s remarks come at a time when Morocco’s relationship with the UAE’s closest ally, Saudi Arabia, is experiencing tension.

Morocco’s government said in a press release that Al Qubaisi highly appreciated King Mohammed VI’s move to open dialogue with Algeria, which she noted would be the best means to resolve the decades-long conflict between the two countries.

Al Qubaisi also commended Morocco’s stability and the level of development it has attained.

She also expressed her pleasure at the relationship existing between Morocco and the UAE, wishing that the two countries would strengthen the relationship, particularly with regards to higher education, handicrafts, and sustainable development.

El Othmani also expressed his satisfaction with the UAE’s support regarding the Western Sahara conflict, emphasizing that threats to the integrity of Moroccan territory hinder the stability and sovereignty of the Moroccan population.

The head of government equally emphasized the strong bonds between Morocco and UAE, predicated on fraternity and humanity, and the longstanding friendship between the Moroccan and Emirati populations.

El Othmani particularly noted the two countries’ political relationship and the efforts the UAE has made to cement it and to include both economic and cultural aspects.

In 2016, Abu Dhabi Fund for Development (ADFD), a foreign aid agency, sent a special delegation to Morocco to study the possibilities of funding new projects targeting sustainable development in areas such as health, education, and energy.

The director-general of the ADFD said the initiative will help the socio-economy thrive across all key sectors and create new job opportunities.

In late 2018, Morocco also affirmed its support for the UAE’s national unity, territorial integrity, and sovereignty regarding the UAE’s three islands: the Greater and Lesser Tunbs and Abu Musa.