The BCIJ has arrested 16 Moroccans for alleged links to a criminal network and for embezzling large amounts of cash.

In coordination with the Directorate-General for Territorial Surveillance (DGST) and Spanish authorities, the BCIJ busted a criminal ring suspected of misappropriating large sums of money through the use of malware and by hacking bank accounts in collusion with some center employees.

A statement from the BCIJ said on Tuesday that the dismantling of the criminal network, based on accurate information provided by the DGST services, is part of efforts to strengthen international security cooperation to fight terrorism and cross-border organized crime.

The 16 individuals, who come from Moroccan cities, including Casablanca, Meknes, Khénifra, Oujda, Marrakech and El Hajeb, were arrested for their alleged links to the criminal network.

The authorities have placed the suspects under police custody, awaiting further investigation under the supervision of the Public Prosecutor. 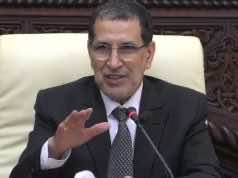 Khiame: Morocco Has Arrested 167 Suspects for Organized Crimes Since 2015