India aims to improve its already-cordial relations with Morocco by anchoring the INS Tarkash at the port in Tangier. 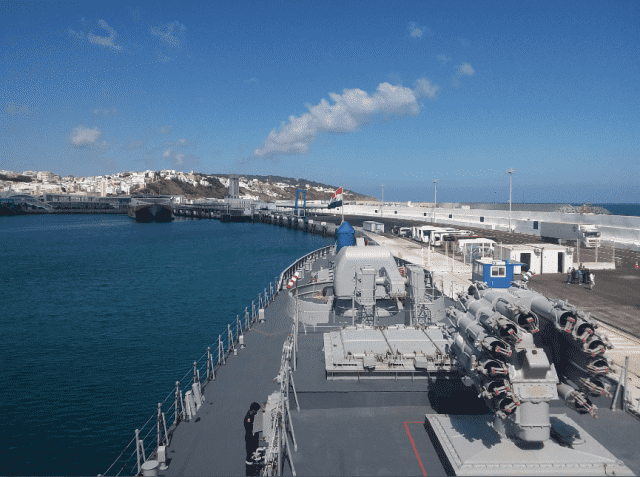 Rabat – Morocco and India have shared cordial relations since as far back as the 14th century, when the scholar and explorer Ibn Batuta embarked on a journey to India. Centuries later, India was among the nations active in supporting Morocco’s decolonization and independence, recognizing the country on June 20, 1956.

Moreover, Morocco and India are both members of the Non-Aligned Movement, a group of 120 developing countries which are not formally aligned with any major world power.

Regardless, both India and Morocco have made efforts over the last few years to further improve relations with one another. The latest move is a visit by an Indian naval vessel to the northern city of Tangier.

On July 8, the Indian Naval Ship (INS) Tarkash dropped anchor at the port of Tangier for a three day visit to the country.

Considered one of the Indian Navy’s most state-of-the-art vessels, the INS Tarkash is currently part of the ongoing peace mission to the Mediterannean. The mission is intended to further cement India’s relations with Morocco, among other countries.

During its stay in Tangier’s port, a number of Moroccan officials — including high-ranking naval officers — are scheduled to visit the vessel. The Tarkash has also planned to participate in a number of activities with the Royal Moroccan Navy, including a Passage Exercise at sea.

For years India has been working to establish stronger relations with Morocco, and the Tarkash’s stay in Tangier is another step in strengthening the bond between Morocco and India.

Beginning with the India-Africa Forum Summit in New Delhi, bilateral relations between India and Morocco have drastically improved over the years, exemplified by 19 ministerial visits between the two countries since the forum in 2015.

In 2018, trade between the two countries surpassed $1.5 billion USD, with the commercial relationship between Morocco and India being the best it has ever been.

With both Morocco and India continually becoming more powerful players in international affairs, each country has seen the relationship as a mutually beneficial opportunity. Relations between the two countries will remain cordial for the foreseeable future.