Rabat – Morocco’s central bank, Bank Al-Maghrib, has produced a coin to commemorate the 20th anniversary of King Mohammed VI’s accession to the throne. The commemorative coin shows the value of MAD 250.

“The sale of this coin is scheduled for August 5, 2019, in the windows of BAM and the museum shop at a public price of 550 dirhams a unit,” said the central bank in a statement.

The coin, cast in silver, features the face of King Mohammed VI; Below the portrait, the coin bears the dates 1440-2019, marking the start of the Alaouite dynasty’s rule in Morocco. 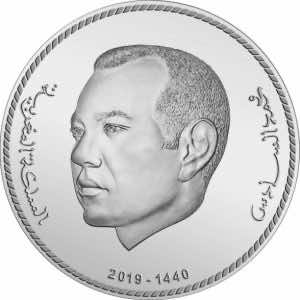 On the reverse, the coin is inscribed with the words; “20th anniversary of the enthronement of HM King Mohammed VI”.

Accompanying the text, the coin features stairs leading to an entrance of a gateway. The stairs lead to the kingdom’s coat of arms. Above the coat of arms, are 20 decorative marks for the 20th anniversary of King Mohammed VI’s accession to the throne. 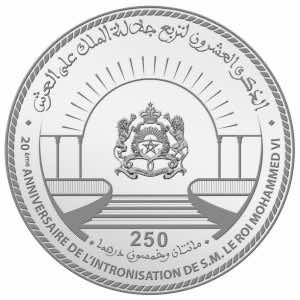