The company will commence rig mobilization in Guercif between March and April.

Predator Oil  & Gas previously announced drilling plans in Morocco would begin in 2020, and issued a new statement on Wednesday to announce updates on its projects from the Guercif Permits I, II, II, and IVV.

The project covers an area of 7,269 square kilometers and lies approximately 250 kilometers “due east of and on trend with the Rharb Basin where shallow gas production has been established by SDX Energy Plc for several years,” according to Predator Oil  & Gas.

The British company owns 75% of the projects and operates in a joint venture with Morocco’s National of Hydrocarbons and Mines Office (ONHYM). ONHYM owns a 25% share of the project.

The recent statement from the British company said the agreement has now come into effect. Rig mobilization can occur between March 15 and April 30.

Predator CEO Paul Griffiths is satisfied with the operation, saying the firm is excited to “be taking another major step towards executing its Guercif drilling plans by exercising our option to take up the drilling rig.”

“The high proportion of commercial gas discoveries recently announced by SDX Energy Plc in the geologically similar Rharb Basin demonstrates the attractiveness of the Company’s investment case for the potentially larger drilling targets at Guercif,” he added.

The British company holds a license for exploring gas in Guercif for a span of eight years.

The company’s finding on the Guercif permit shows “recoverable prospective resources of 474 billion cubic feet for the Moulouya and Tagi prospects, targeting the Miocene and Triassic,” according to Morning Star.

Rabbah, whose statements date back to December 2019, said the gas wells recently explored in Tendrara in eastern Morocco will meet 30% of the country’s oil demands.

Rabbah added that the government has invested MAD 82 billion in the energy sector. 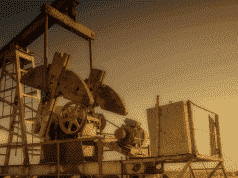