For Slaoui, immigration is a source of talent and innovation and a renewal to all societies, contributing to the development of the US.

Rabat – Moroccan scientist Moncef Slaoui continues to make international headlines. The vaccine researcher is among the honorees of the “2020 Great Immigrants” awards, hosted  every 4th of July by the Carnegie Corporation of New York in honor of its Scottish founder, Andrew Carnegie.

US President Donald Trump appointed Slaoui as the head of his administration’s COVID-19 vaccine development team on May 15.

Born in Agadir in 1959, Moncef Slaoui is a Fez native and spent 17 years of his life in the city of Casablanca.

The Carnegie Corporation paid tribute to Slaoui’s parents who managed to dedicate themselves to “creating educational opportunities for their five children” although they both had only high school educations.

Carnegie’s profile on Slaoui highlighted his passion, recalling how the scientist was determined to make his name in the field of biology and medicine after his younger sister died from whooping cough as a child.

The organization quoted the scientist as describing immigration as a “source of talent, innovation, diversity, energy, and renewal to all societies, and has been a key element underlying the success that the United States has enjoyed over the past decades  — if not centuries.”

Slaoui is determined that in his role as the head of Operation Warp Speed, he and the team will find a vaccine to end the novel coronavirus pandemic, which has claimed hundreds of thousands of lives around the world.

The vaccine researcher vowed that his team will be able to deliver a COVID-19 vaccine by the end of 2020.

In addition to his mission to find a vaccine for the pandemic, Moncef Slaoui has also helped develop over 14 vaccines for several viruses and diseases throughout his career, including ebola and malaria.

Moncef Slaoui holds a Ph.D. in molecular biology and immunology from the Free University of Brussels, Belgium. He completed his postdoctoral studies at Harvard Medical School and Tufts University School of Medicine, Boston. 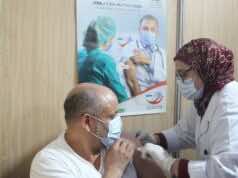