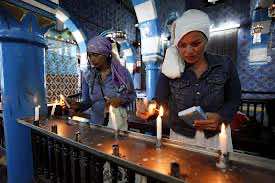 The pilgrimage to the ancient Ghriba synagogue on Tunisia’s resort island of Djerba began on Friday amid tight security, with hundreds of Jewish faithful expected, including Israelis.

The first pilgrims arrived at the sanctuary in the morning, an AFP journalist reported, for the start of an annual ritual that has seen numbers fall dramatically since an Al-Qaeda attack in 2002 and instability following Tunisia’s 2011 revolution.

Security reinforcements were deployed around Djerba, which lies 500 kilometres (300 miles) south of Tunis, with roadblocks set up along the road linking the airport to the tourist area and a police helicopter whirring overhead.

The pilgrimage is due to culminate in the afternoon with the traditional procession through the Jewish neighbourhoods around the synagogue, the oldest in Africa, with checkpoints set up at their entrance.

For the first time since the revolution in January 2011 several dozen Israelis are expected, said organiser Perez Trabelsi, who represents the Tunisian Jewish community at Djerba.

The event was cancelled two years ago with the country on edge after the mass uprising that toppled veteran strongman Zine El Abidine Ben Ali, but it resumed discreetly in 2012 and no incidents were reported.

Beginning 33 days after the start of the Jewish Passover festival, the Ghriba pilgrimage used to attract thousands of pilgrims and tourists, but attendance slumped after a suicide attack claimed by Al-Qaeda killed 21 people in April 2002.

According to legend, the synagogue was founded in 586 BC by Jews fleeing the destruction of the Temple of Solomon in Jerusalem.

Tunisian Jews now numbers around 1,500, compared with an estimated 100,000 living in the north African country when it gained independence in 1956.