Rabat - David Fedele is an Australian filmmaker whose love of filmmaking grew out of his curiosity about cultures different from his own. 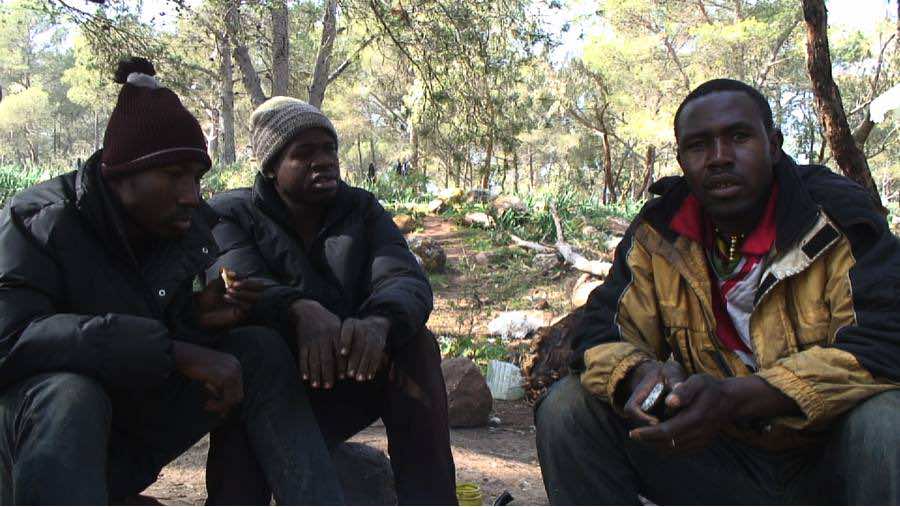 Rabat – David Fedele is an Australian filmmaker whose love of filmmaking grew out of his curiosity about cultures different from his own.

David has completed three films about various human rights issues around the world. Most recently, David spent eight months in Morocco shooting “THE LAND BETWEEN,” a film following the daily lives of Sub-Saharan migrants living in the Gourougou forest in the north of Morocco.

The film explores both the literal and figurative land and life between Morocco and Europe. Morocco World News was able to speak with David about his most recent film and the human right’s abuses that Sub-Saharan migrants suffer at the hands of both Moroccan and Spanish authorities.

Morocco World News: You didn’t start your professional life as a documentary filmmaker. What initially interested you about documentary films? What made you decide to embark on the journey of becoming a “one-man” filmmaker? David Fedele: I guess I was initially drawn to making documentary films through a love of traveling and exploring different cultures, and an insatiable curiosity.

My first film was actually a “film by accident,” when I filmed my three-month solo journey traveling through a country called Papua New Guinea – a remote island in the pacific. By making this film, I understood the power in telling stories through film, and since then I have made three more documentaries.

I still today consider myself a traveler that makes films, rather than a filmmaker. This philosophy has organically led me to become a “one-man” documentary filmmaker. I pretty much always travel alone, and find that this is the way to have the most intense and “real” experiences. So this is how I make films. I attempt to immerse myself into the world of the people that I am filming, to observe and capture their everyday life on film.

In saying that, on the film that I have recently completed in Morocco, I had a young Moroccan filmmaker Reda Afirah as my “assistant,” and this was a brilliant experience and allowed me to have even deeper and more intense experiences and encounters when making the film.

MWN: Before “The Land Between,” you had previously made films about social issues infused with environmental issues (i.e. electronic waste dumps in Ghana in “E-Wasteland” and illegal logging in Papa New Guinea in “Bikpela Bagarap”). What attracted you to Morocco and to the difficulties faced by Sub-Saharan migrants in the Gourougou forest? Which came first: the interest in making a film in Morocco, or making a film about human rights abuses against clandestine migrants?

DF: The focus on my work has always been on social and human-rights issues, and my previous films have looked at the impact that environmental issues have on local communities and “real people.”

My main interest in making THE LAND BETWEEN was from a pure human rights and humanitarian perspective, and a personal interest in migration issues. I had wanted to make a film about migration for some time now, and had spent time in Europe listening to the stories that migrants would tell me about their journeys. I considered making a film in Europe based on these stories, but then decided that it would be more powerful and “real” to document their lives and journeys before they arrived in Europe.

So I started to do some research online and discovered the situation in Morocco, and in particular the Gourougou mountains in northern Morocco where thousands of Sub-Saharan African migrants are living, waiting for an opportunity to jump the barrier into Melilla.

For me, this film is not just about Morocco and Spain. It is a universal story about migration, which could be told in numerous places around the world. It explores general themes of migration, and the question of how and why people are prepared to risk everything, including their life, to leave their country, their family and friends, in search of a new and better life.

Of course within that, there is a very particular human rights story and issue that the film is about, which concerns the violence and mistreatment of migrants by both the Moroccan and Spanish authorities. But I didn’t want just to focus on this. Instead I attempted to show the daily life of the migrants, living with dignity in these terrible conditions. I wanted to “humanize” the story, and allow the migrants to tell their own story.

MWN: Where have you shown your film, “The Land Between,” thus far (both in Morocco and around the world)? What are some of the reactions you are receiving from Moroccans both inside Morocco and outside Morocco?

DF: The film has only been completed for a few months, but has had a lot of screenings already, and a tremendously positive reaction.

It has already been screened in Morocco at community screenings in Tangier and Rabat, and in Casablanca at Festival de Resistance et d’Alternatives.

I am currently in Morocco to organize some upcoming screenings around Morocco, and hopefully will have more details shortly, including potentially a television broadcast, which would be amazing for the film.

Outside of Morocco, the film has already been screened numerous times throughout Europe. It had its International Film Festival premiere last week in Paris at the FIFE Festival International du Film d’environnement, where it was awarded the prize for   “BEST FEATURE-LENGTH DOCUMENTARY.”

I have also been able to show the film to various people at the European Commission, and hopefully I will be able to arrange some screenings to the European Union.

The reaction from Moroccans has been extremely positive. I don’t think that a lot of Moroccans really understand the terrible conditions that a lot of the Sub-Saharan migrants have to endure in Morocco, and the violent way that they are treated by both the Moroccan and Spanish authorities. I think that the film has the potential to open the eyes of a lot of people within Morocco, and expose them to an issue in their own country that perhaps they are not so familiar with.

The reality is that the only reason that Morocco is treating migrants in this way is that they are being encouraged and paid by Europe to control the borders and regulate migration, to ensure that migrants don’t arrive in Europe, so the issue is dealt with on the African continent, rather than Europe. It is purely a political issue – the actions of the Moroccan authorities do not represent the views and beliefs of the general Moroccan population.

MWN: If things go exactly as planned, what impact do you see your film having on the situation of Sub-Saharan migrants in Morocco? What about for clandestine migrants across the world?

DF: The thing that I am learning with making social and human rights documentaries, is that you can never predict the impact that films such as this can have. When you make a film and release it into the world, it then really takes on a life of its own, and you must be open to all of the possibilities.

Obviously the dream is that it has a real and tangible impact, and things actually “change” as a result of the film – in both Morocco and Spain (and the rest of the European Union). But the realistic expectation is that it raises the consciousness of people, and allows them to the space to think and feel differently about an issue, and then empowers them to make decisions and act as a result.

I also think that the film has huge potential to be screened throughout Africa, to show people the reality of the “clandestine life,” as I believe that if people really understood the reality of what lies ahead of them, they would reconsider their decision to leave their home for the dream of a perceived “better life.”

The reality is that migration will not stop. People will continue to move and migrate where there are perceived needs and opportunities – this has been happening forever, and is a natural part of human nature. So as a global society we need to appreciate and understand this, and consider how to view and approach this in a way that respect basic human rights.

MWN: If you could tell Moroccan citizens one thing about the difficulties faced by Sub-Saharan migrants in their country, what would you tell them?

DF: I guess I would just quote them one sentence that was continually told to me by many of the migrants living a very difficult life in Morocco, particularly the mistreatment from the Moroccan authorities – “we are not animals, we are human beings.”

For further information about “THE LAND BETWEEN:”

To watch a trailer: Here

To follow updates and be informed of upcoming screenings: The Land Between Documentary

If you are interested in organizing a community screening of “THE LAND BETWEEN,” contact David directly at [email protected]