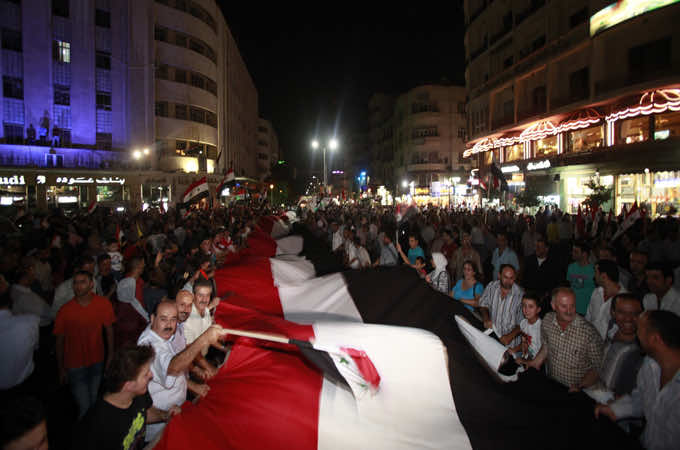 Syria passes today through the most critical crisis in its modern history. It is not about who will remain in power or who will succeed the present regime. It is about the existence of Syria itself as a political entity.

States, just like people, are born and can die. Modern Syria was created after World War One, and the present crisis presents the risk of its disintegration into small and separate entities with foreign dominant powers. It is ironic that the Baath Party which promotes Arab unity, would be the party that presides over the disintegration of a once united and strong Syria.

Over the past several months, Syrian officials have chosen to persist in viewing the crisis from a single and short-sighted perspective. Even after six months of daily demonstrations, heavy causalities and international condemnation, they are still incapable or appreciating their predicament.

In an interview with the New York Times in mid-May, Bouthaina Shaaban, President Assad’s political adviser, declared victory over the “armed terrorist elements” that rocked the country for the previous two months, and assured everyone that the situation was finally under control.

Six months have now passed and the situation continues to deteriorate. The Syrian regime cannot continue with its present policy of crushing the demonstrations: Search, arrest, imprisonment and torture. These have proved to be ineffective. In fact, they have given impetus to further violence on both sides. If this continues, sooner or later the country will descend into civil war.

This policy has also led to the regime’s isolation. Western countries were the first to lead this effort; but now other Arab countries have joined the chorus. Even some regional powers, such as Turkey and Iran, traditionally close allies of the regime, seem to have given up. The Russians have already said they cannot go against the will of the Syrian people, and could not hold the line for long in the face of international and regional pressure. Russian arms sales to Syria are a small fraction of their global sales and they will not risk antagonising the entire Arab world for the sake of a romantic relationship with the present Syrian regime.

The moment of truth has come for the regime to take drastic reform measures, or follow a less magnanimous fate. What are the options and where could the Assad regime go from here?

If the Assad regime continues to be in a state of denial, the military option will become increasingly likely. The demonstrations have long insisted on non-intervention by outside powers, but have recently changed in favour of such an option. There are several political and legal arguments to justify intervention, including the following:

Second, sovereignty bestows on states the right to manage their internal affairs without foreign interference, but it is not a hunting license to kill their own people. When a state engages in a killing enterprise on the scale, breadth and methods employed by the Syrian security apparatus and death squads, any country – not only permanent members of the Security Council – has the right to intervene to stop the killing under the principle of humanitarian intervention.

Third, when the Syrian regime drives its own people to seek refuge in Lebanon and Turkey to escape its atrocities, it creates a situation whereby not only the security of affected countries is at stake, but the entire region as well.

Fourth, Syria became an independent state in 1945 and was declared a republic. Over the past 50 years, it has been transformed into a fledging dictatorship: A one party system and efficient police apparatus where political detainees linger in prisons until their death, and where the expression of different ideas faces sanction with the criminal offence dubbed “disrespect of the state” – whatever that means.

Therefore, once the resistance of Russia to passing a resolution in the Security Council condemning the regime’s atrocities is broken, it is plausible that preparation for a foreign military action will follow, whether under Chapter Seven or not. The resolution will provide sufficient cover for regional powers to justify their intervention to preserve their national interests. Turkey has already expressed itself on this matter. Of course, Israel will not stand by and accept a drastic shift in the regional power structure.

Long before international law became the common law of nations, Caliph Omar bin Al Khattab articulated this concept when he asked his viceroy: “Who gave you the right to enslave people, when their mothers gave birth to them as free men?”

International law, as well as the national laws and practices of democratic states, give people the right to change their governments, by force if necessary, when they are deprived of their liberties and freedom, and all avenues are closed in their face to express their grievances peacefully.

True, some armed elements have been involved in violence against the police and the security apparatus. But people are entitled to rise against oppression and are fully justified to use force to defend themselves and their families.

If this view prevails among the demonstrators, then large-scale violence is likely to spread throughout Syria, and this will usher in a full-fledged civil war. This will not only pit one community against another, based on religious and ethnic affiliations, but it will also draw conflicting ideological and political alignments. Certainly, Israel would welcome the creation of small independent enclaves where minorities would be manipulated to consolidate its position as the unchallenged regional power.

Initially, the West wanted to spare President Assad the “punitive” financial sanctions on the premise that he is a reformer. But after three speeches, Western members of the Security Council, and the world at large, concluded that the president offered more of the same broth, but no beef.

The last speech, coinciding with the symbolic 100th day of the popular uprising, failed to assure anybody in the world of the promised reforms – including his close friends who wanted to save him and his regime. In spite of promises made to the Secretary General of the Arab League that the killings would stop and that reforms were on their way, the pillage and killing of protesters continued unabated.

There is almost unanimous agreement among observers and governments around the world that the window of opportunity has closed for President Assad to spare Syria the disastrous consequences of foreign intervention or civil war. However, there is still, perhaps, a dim light coming through a small hole at the doorknob. President Assad can immediately take the following measures, which will put him on the path of great leaders who stand up in critical moments of history:

As Professor Robert Jensen wrote recently, “power tends to dull people’s capacity for critical self-reflection”. To put it differently, power obstructs the vision of those in control of the Assad regime to see clearly what is in the best interests of their country – and what is in store for them personally if they resist the course of history.

The critical factor in all of this is the US position. President Obama the intellectual, with his Third World view and sympathetic outlook on Islam, is not interested in accentuating conflict situations in the Middle East, and remains interested in a political solution.

It is true that the United States has extended the frontiers of its empire beyond its means to sustain them and is not interested in taking on additional burdens, particularly if they run counter to the policies of its allies in the region. Nevertheless, the United States remains the deciding influence in how matters should and would evolve in Syria. The United States can influence the Russians and the Chinese on the Security Council, if it decided to play hardball with them on the Syrian crisis.

Regrettably, over the past six months the Assad regime has not picked up the right signals, or moved to meet the expectations of any of its allies or adversaries. The situation has deteriorated to the extent that even Ban Ki-moon, the reflective and mellow UN Secretary General has declared: “Enough is enough and the international community should really take coherent measures and speak in one voice” on the Syrian crisis.

The United States has now welcomed the formation of a “National Council” representing Syria’s opposition forces and has advised its nationals to leave Syria. The Syrian regime cannot count on anyone to help it leave its present predicament. The Libyan scenario is not pretty.

Fehmy Saddy has served as advisor to governments, corporations and international development insitutions – including the World Bank Group and Islamic Development Bank. He served as a diplomat in the Syrian Foreign Service and then pursued a career in academia, teaching at the American University of Washington, Beirut and Kuwait. He holds LLB and LLM degrees in International Law as well as a PhD in International Studies.

The views expressed in this article are the author’s own and do not necessarily reflect Al Jazeera’s editorial policy.