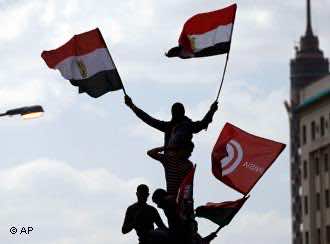 The revolts in the Arab world have inspired a body of works that try to elucidate the events. Some writers have focused on the protests; others are pondering the future role of art and literature in the region.

In December 2010, a young man set himself on fire in a small Tunisian town called Sidi Bouzid. His name was Mohamed Bouazizi. With his “sacrificial gesture,” as French-Moroccan writer Tahar Ben Jelloun termed it in the opening speech of Berlin’s literature festival, this young man in his late twenties unwittingly sparked a series of revolts whose long-term outcomes remain uncertain but whose significance has been likened to the fall of the Berlin Wall.

Ben Jelloun was so moved that he decided to write a fictional account of Bouazizi’s last days. His Mohamed in “Par le Feu” (“By Fire”) represents all humiliated men. “I saw him on his bed like a white mummy and thought to myself: ‘This man had a life, a youth, a failed love affair, disappointments.’ I wanted to return his humanity to him,” Ben Jelloun told Deutsche Welle. For him, a crucial outcome of the Arab Spring is that dignity and honor have been restored to a whole generation. His mordant forays into the minds of Zine El Abidine Ben Ali and Hosni Mubarak as it dawns on them they are losing their grip on power in his other 2011 publication “L’étincelle” (“The Spark”) are his modest revenge on two men who deprived so many of their karama for so long.

This Arabic word, as British writer Johnny West explains in the introduction to his book “Karama! Journeys through the Arab Spring,” combines the notions of dignity, honor and self-respect. In his volume of what he calls “protagonist journalism,” West offers an animated insight into the outlook of those who were willing to risk their lives to get their karama back. Like Ben Jelloun, he is certain that this can never be taken away from them. Moreover, he told Deutsche Welle that “there will never be a monopoly on thought by any group holding the state in any of these countries again. Intellectual opposition and freedom of thought will no longer be crushed.”

Fine line between dignity and indignity

Optimistic as they are, the two writers are not wearing rose-tinted glasses. They are both acutely aware of how volatile the situation is in the region and of the many hurdles that need to be overcome. They know it will be a challenge for many to maintain their sense of karama. Ben Jelloun warns that from a political point of view it has been imperative to remain vigilant since it is so much easier to revert to dictatorship than it is to build up a democracy. West suggests that the United States and the European Union implement a contemporary equivalent of the Marshall Plan, but at the same time expresses serious doubt that this will happen given the current state of affairs.

“The danger of not solving the economic problems is that the indignity of being useless will be with millions every day who do not have a job, and there is only so long your memories of the great glory of the revolution can carry you,” West cautioned.

Ben Jelloun and West share the view that cultural events and literature have an important role to play. “Some, including myself, believe the explosion of Arabic popular culture has been the single most important change in the region in the last 20 years, dwarfing mere events such as wars, peace talks, terror campaigns and regime change,” West writes in his book.

He said that today the Arabic blogosphere was fizzing with poems, cartoons and reportages, which clearly demonstrated how important the written word was. And while Ben Jelloun conceded in Berlin that literature could not do much in the face of human tragedy, he said it was its role to accompany it, to not lie, and to be sincere. “Imagine a society without literary production, theater, cinema, music! It’s impossible! Culture is indispensable. We need to dream, imagine and cultivate our senses. It’s as vital as bread,” he said.

“The politicians should have read more”

In a round table discussion at the festival, this year’s winner of the International Prize for Arabic Fiction, Moroccan writer Mohammed Achaari, said that contemporary Arab literature was on par with the very best of world literature precisely because it met the highest aesthetic requirements, as well as being significant in terms of content.

He reported that after decades in which poets had been punished with  torture, imprisonment, exile or death for broaching taboo subjects such as human rights in their works, in recent years, the novel had provided a relatively free space for young writers to examine social injustice, as well as traditionally unacceptable subjects such as politics, religion and sex. Achaari half-joked that if politicians had read more, they might have realized that their societies were in crisis.

For exiled Iraqi writer Fadhil Al-Azzawi, it is crucial that writers in and from the Arab world ask themselves very carefully, now that their countries are in transition, what they should write about. “The key subject is the struggle between modernity and extremism, traditionalism and antiquated patterns of thinking,” he said.

“What is most important for literature and for people on the street is to examine how to modernize our societies, stop fundamentalism from developing and open up new horizons for compassionate, free and modern development.”

If young people are going to maintain their newly found sense of karama and never again be driven to such despair that they choose to emulate Mohamed Bouazizi, development along these lines seems vital.