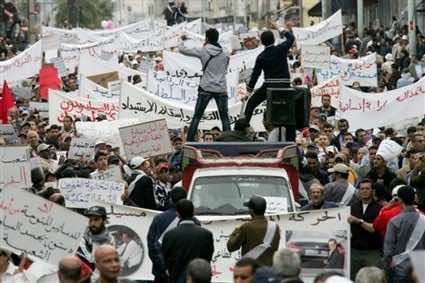 Some time ago I started contemplating our position in the world and how hard and arduous we find the task of taking a step forward. Our education system is backward and resides at the bottom of the list behind other countries with less favourable conditions and means. Unemployment is yet another issue that has been unsolved for decades and keeps getting worse day after day. Even the way we lead our everyday life has its defects and problems and it strengthens the grip of corruption on us. Some people may blame other parties for this deterioration; others seem to be indifferent and even happy about the way they live.

First and foremost, we really need to acquire the habit of accepting blame instead of placing it on others. Complaints and grievances have become permanent traits of our character. It seems that we have become addicted to playing the role of the helpless victims and we find it masochistically sweet to feel like others prey on us. There are many circumstances that have contributed to this, but the issue now is to take things back into our hands. Maintaining the status quo will take us nowhere and placing the blame for our own misery on others is not really how we should deal with things.

We need to take an active stand and be proactive. We cannot blame the internet or staying up late for our children’s low performance at school. In the same way, we cannot sit back and watch others make decisions for us, as is the case in elections, for example. We never vote and later blame the government for not doing its job. By the same token, we cannot blame teachers for being lazy while we never do our homework and ask them to make efforts and correct it for us. Similarly, it is not wise to break traffic laws and offer a bribe to law enforcement authorities to turn a blind eye then accuse them of corruption. We need to be brave enough to assume our responsibilities as citizens and fulfil our duties towards ourselves as a people.

One major problem that we need to be conscious of is the fact that no one is ever held responsible for the mistakes they make. We all notice how a lot of people commit unforgivable crimes against us as a people but they never pay consequences for that. State officials squander our wealth and money on their own personal pleasures and no one ever stands up to stop this. We see how bridges fall down and roads crack without ever holding people in charge accountable for that. We also see how some people amass money at our expense; we all see how hard and expensive it is to get an apartment simply because there is a lobby controlling real estate for their own benefit. But how do we solve this problem? We take loans from banks to get a place to live in. We cannot solve our problems if we remain passive.

Only after assuming our position as responsible citizens and taking the initiative can we take a step forward by. There is no reason whatsoever why we let others make decisions for us and hope they will bring about change. We should not wait for the government, for example, to fight bribery and corruption while we always encourage this. It is so strange to see and hear people complain how they cannot obtain the minimum of their rights from the public administration without offering tips and bribe to officials. There is no bribe taker without a bribe giver. Even those who have become audacious enough to impose corruption on the citizens would not have had the “courage” to do so if we had been brave enough to look them in the eyes and tell them “No way!!”

What we really need to do is to blow the whistle on those people and reproach them because they never respected us as citizens. We need to have the courage to tell those people who think themselves above the law that they work for us. If they cannot see that they need to pack their stuff and leave. But we cannot do this if we do not assume our role as mature and responsible citizens and take things into our hands by taking the initiative of changing our behavior. In other words, we need to build a strong social personality.

What I mean by social personality is to have the ability to choose how to live and under what circumstances, regardless of all the temptations that surround us. I keep hearing people blaming FIFA for organizing major soccer events during period when students are preparing for their exams. What sense does this make?

Likewise, I have heard people blaming the government for organizing cultural events like Mawazine festival at exactly the period of exams. As far as I am concerned, I do not see the point of such an accusation because we always have the choice of whether to attend the festival or not. Why should we blame the government for that? We see thousands of people attending the festival and enjoying it and yet they still criticize its timing. We need to have a strong personality to make our own choices. We always have the choice of not attending and we can make it a failure if we choose to. The choice is ours regardless of any intentions on the part of the government.

Speaking of festivals, I have heard a lot people expressing their dismay at the huge amounts of money world celebrities get in order to participate in the event. Although this criticism may sound reasonable, we do not admit that considerable business activity moves the whole city of Rabat at that time. Restaurants, hotels, transportation and other services thrive during this period. People come from different cities of the kingdom and there are those who come from abroad including tourists who have never experienced Morocco.

I am not defending this festival or saying that it is all-good. There are certain things that need discussion and reconsideration, but it is definitely not a solution to abstain from organizing such events simply because some people think that our children perform poorly at school because of them.

It is really not healthy for us as citizens to sit back and be good for nothing but blame invisible powers for conspiring against us. Things must be taken in hand rather than left in other people’s hands to blame them for our own misery. We need to be strong enough to fight corruption and laziness to make our country a better place. We need to stand up for what is ours and fight to obtain it.