Fez - Tangier is a dove poised on the shoulder of Africa. Tangier (Tanja in Arabic and Tanger in both Spanish and French), is a city in north Morocco at the western entrance to the straight of Gibraltar, where the Mediterranean meets the Atlantic Ocean off Cape Spartel. 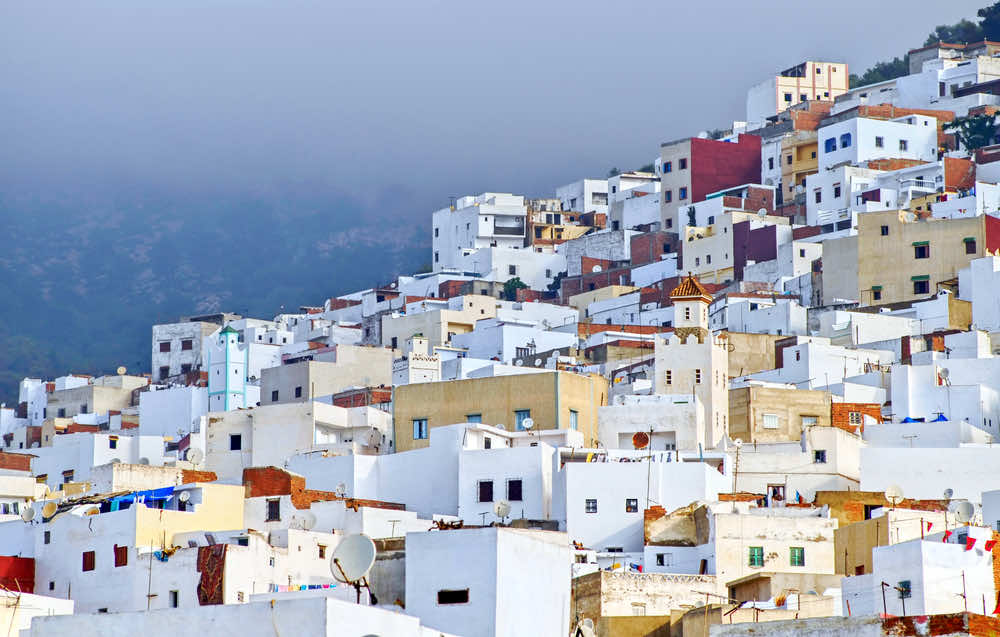 Fez – Tangier is a dove poised on the shoulder of Africa. Tangier (Tanja in Arabic and Tanger in both Spanish and French), is a city in north Morocco at the western entrance to the straight of Gibraltar, where the Mediterranean meets the Atlantic Ocean off Cape Spartel.

The history of Tangier goes back to early ancient times; very precisely, to the 5th Century B.C, when it was founded by Carthaginian colonists, who appreciated the geographical locality of the setting.

Tangier was taken from the Carthaginians by Vandals in the 7th then the Arabs. In 1471, Tangier became under the Portuguese dynasty to be given to Charles the 2nd of England as a part of a dowry from Catherine of Braganza.

After two centuries under British hegemony, Sultan Moulay Ismail seized the city by a very victorious blockade, which compelled the British army to withdraw.

In 1911, because of its geographical location and because of its varied ethnicities: approximately, 1,200 Jews, 2,100 Muslims (Arabs and Berber) and 10,000 Europeans including British, Spanish and French, Tangier became an international zone. This status of Tangier was abolished in 1956 after the declaration of independence of Morocco.

There is an air of mystery about the city nomination. According to a Berber mythology, Tangier was first founded by Sufax son of Tinjis or tinga – a Berber goddess. Thus, Tangier is possibly derived from that Berber goddess Tinjis.

Bewitched by its magical setting, where Mediterranean meets Atlantic, and its melting pot of civilizations of Muslims, Jews, Christians and foreign immigrants, many international celebrities have come to holiday or to settle in Tangier.

Henri Matisse (1869-1954)- a French artist, leader of the fauve group- did not hide his admiration for Tangier when he said in one of his writings: I have found landscapes in Morocco exactly as they are depicted in Eugene Delacroix tableaux (1798-1864).

In addition to Delacroix and Matisse, many other famous and creative people like Paul Bowles, Paul Lukas, John Middleton, Kenneth William, Ira Cohen and the Rolling Stones, to name a few, have all lived, died, or spent their holiday in this mysterious city and been captivated by its spell.

Consequently, Tangier, first or last city in the whole continent, is a stopover not to be missed. Do not hesitate to visit that baffling setting, where you can find different accommodations.

In Tangier, as in the other Moroccan cities, there are numerous riads and hotels classified from zero to five stars. In other words, Tangiers responds to all tastes and social strata. Also, Tangier contains Bars, discos, cafés and restaurants, where you can enjoy and get rid of your stress. If you don’t want to spend much money, popular restaurants are your target. There you can have your launch for five Euros or less and if you are generous enough, you can have a fancy meal in an elegant restaurant.

Nearby, various excursions can be made. Your first destination is Cape Spartel, which is known to the ancients as Ampelusium. It is a place of big attraction to tourists who come copiously to this region to enjoy swimming and surfing. The second is Cape of Hercules, which lies a few miles away from the city.

It is believed that the legendary Hercules slept there before attempting one of his 12 labors. The third destination should be the Grand Socco, where you can let yourself follow your whims and your inspiration. It is a place dominated by the minaret of Sidi Abid mosque in multicolored faience. It is a Square where the women in red and white striped foutas (towel), wear their broad hats adorned with pom-poms. Surely, you will be fascinated by the general view of the milieu.