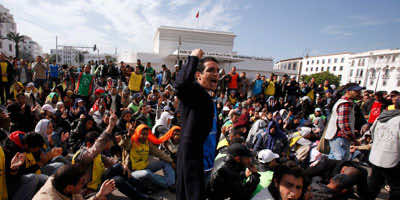 By
Jamal Saidi
-
Jamal Saidi is an English teacher.
Jan 15, 2013
Spread the love

I understand that you are going through hard times, as you haven’t succeeded yet in getting a job. You worked hard at the university until you graduated, only to find yourself with no source of income. My heart and my prayers are with you.

I also understand that you have experienced bitterness and poured scorn on several factors such as “lack of opportunities” and corruption. I may tell you about almost every single reason that you believe in as an obstacle to your success. I am not an astrologer nor was meant to be. I simply went through similar circumstances.

There comes time, my dear friend, when you badly need to realize that the alleged reasons are but scapegoats for a spectacular failure. These offerings, if I may say, are still given by young Moroccan university graduates to justify their “bad luck.” You undoubtedly noticed that they fall into various categories. Some of them would resort to drugs while some others have protested, for years, in front of the parliament; the rest would just wait passively for good news that might never come. I know that you fall into the last group, but I firmly believe you are intelligent enough to act now and immediately.

During your study period at the university, have you ever been asked to pay for your studies? Never! Regardless of what it might be said about “the poor quality” of Morocco’s educational system, it is still a luxury to study for free. Needless to say, many Moroccans who enrolled at the universities of the kingdom proved to be as excellent as their counterparts in the globe. Let us confess that we owe a debt of gratitude to Morocco, and say proudly to the whole world: How generous you are, our beloved country!

It is high time you stopped playing the role of the victim, for you are the master of your fate. To hold the assumption that Morocco does not offer opportunities is the easy way out yet a deadly mistake that may cost you misery and poverty for the rest of your life. I do not deny, at all, the existence of corruption, and whatever external factor you may name. After all, Morocco is not Plato’s ideal republic. I should stress, however, that the country is much better than before in terms of encouraging the young to establish their own businesses, as well as transparency in offering government jobs.

I am afraid, my dear friend, you are the only real stumbling block to your success, as long as you keep victimizing yourself instead of taking the initiative and prove to the world that you can reach for your dreams. The unrevealed living truth that most of the unemployed graduate hold is “I am jobless because I chose to be so.”

During a discussion in a cultural center, a Westerner citizen could not hide his astonishment to the ongoing protests in front of the parliament in Rabat. A graduate person, he said, should assume his or her responsibility and find a job himself. You may say, “il ne faut pas comparer l’incomparable” or you should not compare the incomparable. I respond that self-reliance is the gist of the matter rather than opportunities. If you do not have an opportunity, create it. Obviously, you cannot create an opportunity if your self-reliance and self-confidence are at zero level.

Your educational level is outstanding, compared to half of the population. In fact, you are among the elite of this country. You hold a bachelor degree or probably a Master degree, whereas millions of your countrymen could not enroll in universities, and as you know “knowledge is power”. Let me tell you about a Moroccan who grew poor and lived in poverty and misery for years. He described the tragic moments of his life, “my family lived in poverty very similar to that of Somalia, and my brother died following eight consecutive years of hunger and thirst.” He went on to say, “we were dying of hunger and thirst.”

Recently, his name has been cited by a US magazine as one of the richest man in the face of the earth. Miloud Chaabi was an ordinary shepherd. He had neither a bachelor degree nor a Master degree, but he had an iron will. Unlike him, you do not suffer from hunger or thirst. You are, therefore, in advantageous position. Revolt against the victim inside you, and liberate yourself. You can do it, and the limit is the sky. So please, wake up!

Until then, I look forward to hearing about your achievements in the near future.