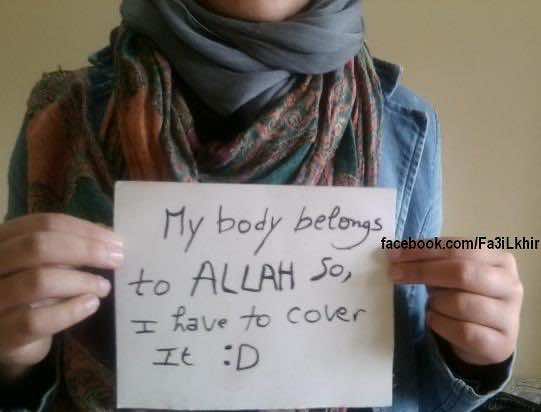 Since Mary Wollstonecraft’s book A Vindication of the Rights of Woman (1792) and John Stuart Mill’s essay The Subjection of Women (1869), feminist thought started to formulate steadily and consciousness towards the plight of women under various repressive and oppressive cultural and ‘legal’ constraints started to rise.

Throughout the history of feminism, no feminist movement, to my knowledge, has ever adopted blunt nudity as a form of protest against patriarchy! By contrast, feminists were always highly intellectual, erudite and critical and, thus, depended on knowledge and strong arguments to subvert patriarchy rather than on their naked breasts.

Arab and Muslim feminists, even those described as radical feminists, have always questioned Western feminism and made reservations about its claims and assumptions. Western feminist discourse was deemed by most Islamic and Third World feminists as hegemonic, essentialist and reductionist because it does neglect the plethora of women experiences and specificities around the world. Thus, Muslim feminists produced their own feminisms according to the cultural and social conditions of their societies.

The adoption of Femen protest strategy – let’s go topless, let’s breast them – by Muslim women without any further ado attests to the blatant ignorance of these women, who, up to now, didn’t produce a single page –not to say a book- to convince us of their ‘struggle’ and explain the theoretical foundations of their movement, its objectives, arguments etc. What we got from these women by far are the pictures of their sickening breasts popping up on our computer screens unscrupulously.

In fact, calling these women feminists does a great harm to feminism, especially to feminists who theorized about and lobbied against the exploitation of women’s bodies in cinema and advertisement by making the female body a site for scopophilic and voyeuristic desires. The body that feminists tenaciously defended is being flagrantly exposed and trivialized.

After Tunisia, Femen Maroc launched its Facebook page on March 23. The admin of the page made a call on Moroccan women to send their topless pictures to publish them on the page and, it seems, the call was quickly heard by some women. A recently published picture shows a topless woman covering her face and exposing her breast on which was written: “La liberté est mon choix” (Liberty is my choice). Another allegedly Bahraini woman sent her naked picture after writing an expression of solidarity with the Tunisian Femen girl who disappeared after uploading her naked pictures on Facebook. “Nude for Muslim girls. I took off my Abaya for Amina. I’m a Muslim” the expression reads.

After skimming the comments on the pictures, it seems that the Moroccan Femen page receives very harsh attacks, sometimes with vulgar expressions. A certain Manal Mounib writes: “We never ask for the right of women in such a way. It is a shame that you took Amina as an example of the freedom of women. Is the naked breast the only means you found? Create associations and organizations, raise funds, seek higher education to promote, read the Qur’an. Our Islamic religion gives more than the right of women! You are malleable and docile!” 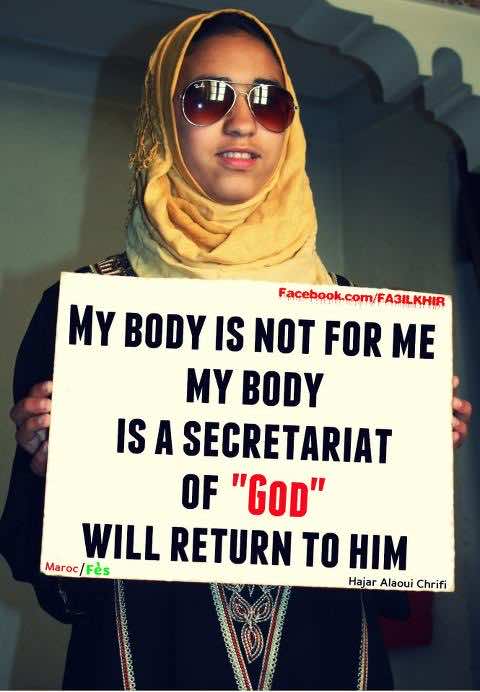 Another initiative taken by some Facebook activists against Femen Maroc was a call on Moroccan women to send their pictures with veils and messages to Femen. The Moroccan Youth Campaign against Immorality and Philanthropist Facebook pages received hundreds of pictures of women and young girls who denounce nudity and immorality and recommend the Hiijab for Moroccan women. A young girl named Marwa contributed with a picture of hers with the Hijab and a message that says: “Dear sisters, did you know?! Did you know that my body – and yours – belong only to Allah and one day it will return to him?! So preserve it by covering it! Keep that in your mind. You are a princess of Islam with your Hijab. Proud to be Hijabist!!”

It’s noteworthy that the three official websites of Femen Movement are hacked up to the moment of writing these words. “We will cut your breasts and give food ours dogs! Die sluts, prostitutes from Isreal,” says the message of the hackers left on the websites homepages.