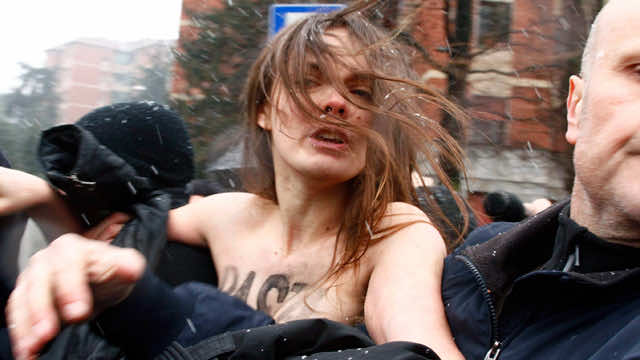 In a previous article entitled “When Gender Equality Fails in the Arab Uprising”, I attempted to highlight the incredible input of Arab women in the overthrowing of Arab dictator regimes, and the immense change that accrued through the contribution of women in every event, from the protesting to the election of the new representatives. Women had hoped for a radical change in their own countries as citizens as well as their status as women claiming their rights to be protected from all kinds of violence and oppression.

Unfortunately, women’s great hopes have been dashed. Many reactionary movements have sprung. The Facebook group “the Uprising of Women in The Arab World” is one of the most well-know groups to create a platform via which Arab women can voice their needs and neglected rights.

Inspired by Ukranian feminist organization, FEMEN, a number of post revolutionary female activists have been stripping naked as a new method of protest. Their objective was mainly to attract the media’s attention, and so far their methods have worked pretty well. In describing this group of women, I deliberately employ the term ‘female activist’ as opposed to ‘feminist’, because in my view, the organization can in no way be considered a feminist one.

As a matter of fact, the group soils the very name feminist and makes the position of feminism even more problematic than it already is. Feminism has always brought faulty visions and prejudges no matter how fair its demands are have been. Now, as the Femen organization is gaining more steam, it uses the name of feminism in a way that adds insult to injury.

I choose to refer to these women as “female activists” so as to not devalue the efforts of the many feminists who bravely claim and continue to claim equal rights with suitable means of protest. As I see it, Islamic feminism is and shall always be the ideal which doesn’t transcend the limits of civilized protest, and which maintains women’s dignity and modesty, unlike FEMEN’s barbaric notion of public stripping.

As a matter fact, FEMEN was immature in its basic roots. It was founded by an emotionally unstable Ukrainian teenage rebel, who later on joined other teenage girls aged 17 and 18 years old. Later on, the Ukrainian girl went to France where another absurd organization invited her to establish a large worldwide stripping- in-public organization which can have an international scope, and thus, garner international media attention.

Furthermore, it should be noted that the organization is highly ignorant. Most of the s protesters are academically uneducated. In fact, they have admitted in several interviews that they were not fans of “huge books” and that they would rather adopt a “visual” approach to bring attention to their concerns and demands.

Speaking of the demands, here we’re stumbling across another interesting fact which Arab women whom are so fond of the organization’s bold methods neglect. One of the top priorities of the organization on is the abolishment of all religions, namely Islam. Indeed it turns out that the radical change that they’re seeking is not very universal, nor is it limited to social patriarchy and domestic violence. It is actually a list of absurd, and nonsensical demands disguised in the name of feminism.

Tunisia was the first Arab country that the FEMEN organization targeted. Tunisia has often been considered progressive on the subject of women’s rights, especially in comparison some more patriarchal Arab countries. Today, as the nation is being reconstituted into a more democratic and more transparent nation, blocks are being thrown on its way and FEMEN is most certainly one of these blocks.

Today, Tunisia is in a mess, trapped between the accusations of women’s neglected rights, the newly launched Fatwa on the topless protester Amina, and the reactions of FEMEN protesters, such as the gathering outside the Grand Mosque in Berlin defending Amina’s case. All are but wildfire that can consume all the attention towards building a new nation.