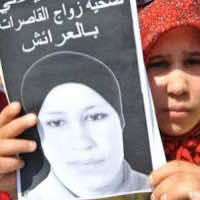 « She died because of the pressure her own family was putting on her ». This is how Amina Filali’s husband explains the 16 year-old’s suicide, a little over a year ago.

Amina was only 15 when she was raped. The Moroccan penal code states that raping an underage child is punishable by 20 to 30 years of imprisonment.

However, the article 475 adds that the rapist can avoid punishment if he marries his victim. Amina’s and her attacker’s families having agreed on this solution, she was married to her abusive rapist and committed suicide 5 months later, on March 10th, 2012, by ingesting rat poison.

Is the law responsible for this terrible tragedy, which isn’t an isolated case? For Rachid Ait-Belarbi, Amina’s family’s lawyer, it enables the creation of artificial couples based on abuse, which leads to divorces and suicides.

It is the height of hypocrisy from the whole society which reduces young women’s value to their hymen.

“We must protect girls. That young woman is no longer a virgin doesn’t mean she has to be married to this man. The society must change.”

Indeed, a rapist should be in jail, not in his victim’s bed with her parents’ consent.

Leila knows too well how society rejects raped underage girls. She lived in a small village and was raped by a man she had refused to marry and who was seeking revenge. That day, she became pregnant. Her mother, who knows she was raped, threw her out of the house, because she was afraid of what neighbors and her own husband would say. Leila had to flee to Casablanca to give birth to her daughter, and now has to live on her own, far from her loved ones.

She explains how a girl who has lost her virginity is considered « rotten ». What is most striking is the fact that her own mother rejected her. According to associations defending rape victims, the mother isn’t her daughter’s ally because she bears the culpability of not “delivering” a virgin girl to her future husband.

The government has promised changes in the law that will protect girls better. Efforts also have to be made concerning the overall situation of women in the country, such as the fact that rape does exist within marriage, which is not recognized by the Moroccan law today. However, in order for changes to be implemented and efficient, the whole society’s way of thinking has to be reconsidered and restructured.