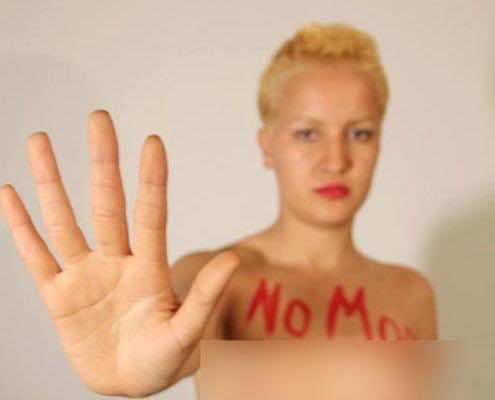 After the uproar she caused after posting her topless photos on her Facebook wall, the controversial Tunisian Femen activist Amina Tyler is back again with bare breasts but this time with a new look. Amina looks drastically different after she retouched the image she made her known to the world; she cut her hair very short and dyed it with a yellowish color. Amina the brunette is now Amina the blonde.

Amina Tyler seems to have changed her look but not her Femen ideologies and her ‘fight’ against the ‘degrading image of women’ continues. The first Tunisian Femen woman who stirred a hot debate for two months after she engaged in Femen ‘topless jihad’ against patriarchy, seems not ready to give up her cause despite the harsh criticism she received from the conservative circles in Tunisia and the whole Arab world.

The Tunisian online news outlet Tuniscope features Amina Tyler with bare breasts with an inscription in English that reads: “No more moral lessons.” This daringness from the part of Amina, which is interpreted as a blasphemy, provokes the ire of Islamists.

Amina was also seen in the streets of Tunis on May, 1st protesting on the occasion of the World Labor Day.

Amina’s actions were a defiant imitation of Ukrainian women’s topless protest group Femen, in a country where hard-line Islamists have become increasingly active since the January 2011 revolution.

Tuniscope mentions that a fundraising campaign has been launched by the Ukrainian Femen group so that Amina could live independently the way she wishes. Femen France indicated, in this same context, that scholarship applications were made for Amina to continue her studies, probably abroad.