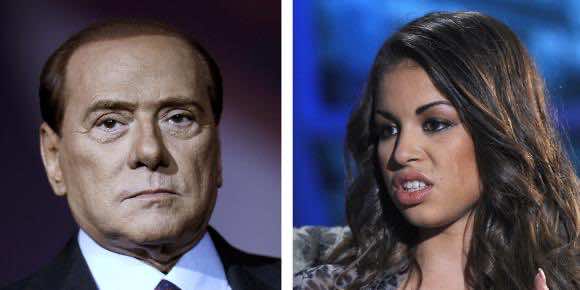 ROME — An Italian court on Monday sentenced Silvio Berlusconi to seven years in jail and banned the former premier from public office after convicting him of paying for sex with an underage prostitute and abusing his power to hide the liaison.

Berlusconi’s lawyers immediately said they would appeal the verdict.

The sentence went beyond the request of prosecutors, who had called for the 76-year-old billionaire to serve six years, and could spark serious tensions within Italy’s uneasy grand coalition government.

The sentence is “completely illogical,” said Berlusconi’s lawyer Niccolo Ghedini, amid a clamour from supporters accusing the Milan judges of persecuting the three-time former prime minister.

The media magnate’s cronies, many of whom took to Twitter in disgust, described the verdict as “utterly shameful” and “a political verdict, a coup d’etat.”

Berlusconi’s spokesman Paolo Bonaiuti said it confirmed “the bid to eliminate Berlusconi from the political scene… but the attempt, which has gone beyond the limits of credibility, will fail.”

Berlusconi’s daughter, Marina, chairperson of his holding company Fininvest, said it was “an absurd spectacle which had nothing to do with justice” and the guilty verdict “was written from the start.”

James Walston, politics professor at the American University of Rome, said the conviction would “accentuate already existing divisions within the cabinet.”

“Berlusconi’s supporters are defending him even more passionately than before. They are spitting fire and blood,” he said.

Interior Minister Angelo Alfano, the secretary of Berlusconi’s People of Freedom (PDL) party, said the verdict was “worse than the worst case scenario” and urged him to “soldier on” — a possible reference to his support for the government.

The coalition relies on the support of the PDL, and observers had warned the capricious billionaire could pull the rug out from under the government if he felt it was not offering him legal protection.

Berlusconi did not immediately react to the verdict.

The sentence will be suspended until all appeals have been exhausted, a process likely to take years.

Berlusconi’s age also means he is unlikely to ever see the inside of a prison cell because of lenient sentencing guidelines in Italy for people over the age of 70.

Berlusconi was accused of paying for sex on several occasions with Moroccan-born Karima El-Mahroug, a then 17-year-old exotic dancer and busty glamour girl nicknamed “Ruby the Heart Stealer”.

He was also accused of having called a police station to pressure for El-Mahroug’s release from custody when she was arrested for theft.

His defence claimed he believed El-Mahroug was the niece of former Egyptian president Hosni Mubarak and wanted to avoid a diplomatic incident, but prosecutors insisted it was a bid to conceal their affair.

While abuse of office was the more serious of the charges, it was the sex with the pole dancer after racy “bunga bunga” evenings in a basement room of his mansion that mesmerised the public.

Both the flamboyant billionaire and El-Mahroug denied having had sex.

Prosecutor Ilda Boccassini told the court in her summing up speech last month that El-Mahroug was “part of a prostitution system set up for the personal sexual satisfaction of the defendant”.

She said the dancer quickly became the premier’s “favourite” and had not admitted the relationship with him only because she had received as much as 4.5 million euros ($5.8 million) from him.

El-Mahroug proved an unreliable witness, admitting in May that she had lied to investigators. But she still admitted to receiving tens of thousands of euros for attending parties.

Berlusconi has been involved in a series of legal battles ever since entering politics in the 1990s but multiple cases against him have either been thrown out, expired under a statute of limitations, or had initial convictions overturned on appeal.

The former cruise ship singer has long blamed his legal woes on persecution by “Communist” judges.

A Milan court last month upheld his conviction for tax fraud connected to his Mediaset empire, confirming the punishment of a year in prison and a five-year ban from public office, frozen pending a second appeal.

Monday’s sentence is stiffer than some expected, and sets a worrying precedent just months ahead of a definitive ruling in the tax fraud case — which is expected to fall around October.

“The temperature has gone up for Berlusconi enormously,” Walston said.

“He now has to use every weapon in his armoury to get out of the Mediaset conviction,” he added.