A photo taken of the head of the government, Mr. Abdelilah Benkirane in Casablanca on Sunday, during the opening of the Forum of the Youth of the Justice and Development, where he appears waving the finger sign of Rabia El Aadaouia, caused a stir in Morocco. 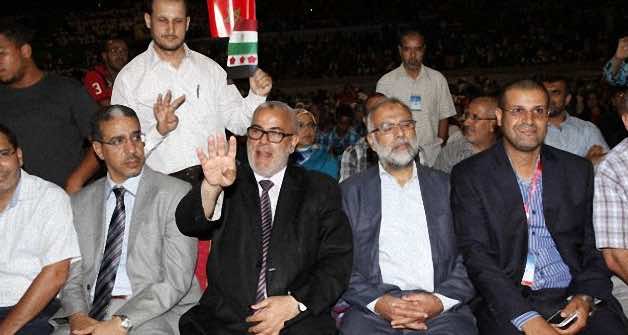 By
Larbi Arbaoui
-
Larbi is a freelance writer and assistant editor at Morocco World News.
Aug 31, 2013
Spread the love

A photo taken of the head of the government, Mr. Abdelilah Benkirane in Casablanca on Sunday, during the opening of the Forum of the Youth of the Justice and Development, where he appears waving the finger sign of Rabia El Aadaouia, caused a stir in Morocco.

Sitting with leaders of his party, Mr. Benkirane held up his four fingers, a sign of support to Egypt brotherhood’s sit ins against the “army coup”, during the annual forum of the youth of the PJD, held on the theme “in solidarity with the Islamists in Egypt.”

Rabia El Aadaouia is the famous square in Cairo where the Islamists held their sit-in before they were dislodged by the army.

Speaking to Menara, Khadija Rouissi of the Authenticity and Modernity Party, said: “It is not clear whether Mr. Benkirane acts as head of government, a position he held for two years or as party leader of the Justice and Development. How the Youth of his party can tell the difference between partisan interests and state interests when he fails to act as a statesman?”

The PJD’s position in regard to the developments in Egypt and the support its members show for Muslim Brotherhood doesn’t rhyme with the state’s stance, especially that the kingdom has more or less chosen to keep a certain neutrality in an internal issue that divides the Egyptian people, calling on all parties to exercise restraint and to adopt dialogue as a means to reach political consensus.

Mr. Benkirane has previously been accused by the Amazigh activist Ahmad Assid of failing to make a difference between his position as party leader and that of the head of government whose actions are scrutinized and most of the time understood as the state’s official position.