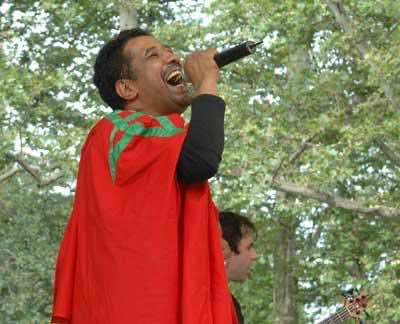 By
Nadia ELBOUBKRI
-
Nadia Elboubkri is a graduate of Temple University where she holds a Bachelor of the Arts in Political Science with a focus on Middle Eastern studies and political economy.
Sep 19, 2013
Spread the love

The singer, who has been a longtime resident of Morocco, is married to a Moroccan woman, and is close friends with King Mohammed VI. He was offered Moroccan nationality by royal decree issued on August 20th.

Khaled decided to move from France to settle down in Morocco to raise his children because he did not fully agree with French values.

In an interview with Tel Quel in 2009, Khaled discussed his relationship with the king, saying: “I had the chance to meet the King when he was prince. Then when he became king, he had not turned his back on me. Quite the contrary, he has not changed and it touches me. We kept our friendship, because he is a character of my generation, who [have a young mentality]. He often invites me to his house when I’m in Morocco.”

Cheb Khaled lives with his family in a villa that King Mohammed VI offered him over a year ago, on the coast of Saadia. He officially became a Moroccan citizen on August 20th, the 60th anniversary of the revolution of the Moroccan king and his people.