NAIROBI - President Kenyatta and leaders from different political parties in Kenya came together in a show of solidarity to condemn terrorist attack on a shopping mall in Nairobi. 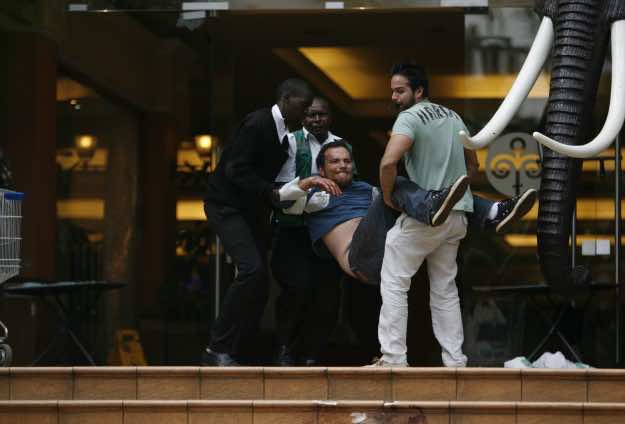 NAIROBI – President Kenyatta and leaders from different political parties in Kenya came together in a show of solidarity to condemn terrorist attack on a shopping mall in Nairobi.

President Uhuru Kenyatta and leaders from the different political parties in Kenya, including his arch rival former premier Raila Odinga, came together Sunday in a show of solidarity to condemn the terrorist attack on a shopping mall in Nairobi, which has claimed 59 lives so far.

“We thank all the Kenyan people and the international community for their solidarity and support,” Kenyatta told a press conference at State House Nairobi flanked by opposition leaders.

The president stood shoulder to shoulder with Odinga, leader of the Opposition Cord Coalition, who lost to Kenyatta and his Jubilee Coalition in a bitter contest on March 4. They were also joined by Musalia Mudavadi of the United Democratic Forum (UDF).

The three called for calm and support for the ongoing security operation to deal with the attackers. Kenyatta reaffirmed that the death toll remained 59, and the injured at 175. Earlier the leaders had visited the injured at Aga Khan and MP Shah Hospitals. Heavily-armed attackers entered the Westgate Mall, not far from the Central Business District, shortly before noon local time.

They shot at guards manning a car park before storming the building both through the main entrance and an underground opening, according to witnesses. The attackers were still holed up inside the building by mid-day Sunday, with a number of shoppers still believed to be held hostage or trapped inside.

Al-Shabab militant group in Somalia has claimed responsibility for the attack, describing it as a reaction to Kenyan military intervention in Somalia. – Determined President Kenyatta revealed losing a nephew and his fiancée in the “cowardly” attack, insisting the attack will not dampen the Kenyan spirit. He reaffirmed the same message repeated by Kenyan security officials that no foreign troops were helping in the ongoing operation.

“We have received many messages of support and offers of assistance from friendly countries,” he said. “But at his moment, this remains a Kenyan operation,” insisted the president. This was in apparent response to increased speculation in Nairobi that the Kenyan security forces had been joined by others from some foreign countries, especially Israel. President Kenyatta insisted that his government would not withdraw its troops from Somalia.

Somali Ambassador to Kenya Mohammed Ali Nur earlier condemned the terrorist attack via the local TV station NTV and pledged to continue their collaboration with Kenya in fighting the Al-Shabab militants. Kenyatta appealed to Kenyans to be patient and allow security officers to deal with the situation.

Odinga, for his part, urged Kenyans to ignore attempts to try to divide them along religious lines, in reference to claims earlier that some of the attackers had asked Muslims in the mall to move out before they started shooting. “We must remain united because terrorism is universal,” he told the press conference.

“It takes place in Israel, Iraq, America, Britain, Spain and other countries. So, we should treat this just like those that have occurred in other countries and not apportion blame,” added Odinga. Kenyan Muslims have condemned the terrorist attack, saying it ran counter to the tolerant teachings of their faith.

President Kenyatta, Odinga and Mudavadi appealed to the international community not to issue any travel advisories to tourists, describing the hostage-taking as an isolated incident.