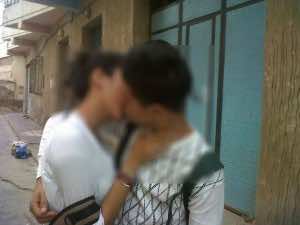 By
Larbi Arbaoui
-
Larbi is a freelance writer and assistant editor at Morocco World News.
Nov 21, 2013
Spread the love

Taroudant- The international hacktivist group bombarded Moroccan government Twitter accounts with tweets using the hashtag  #NadorKiss beginning at 7 p.m. EST, calling upon “all who object to this gross injustice to speak out and demand the cancellation of the prosecution of three teens persecuted for posting a picture of them on Facebook while kissing each other.

The Anonymous Hackactivists explained that “The goal of this Tweetstorm is two-fold. We wish to raise awareness of this injustice as well as target the Moroccan government Twitter account @ChefGov_ma to stop the prosecution of the Nador teens.

Hundreds of tweets had been sent by 9 p.m. yesterday. 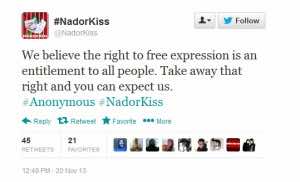 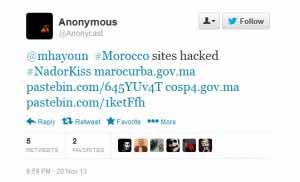 Commenting on the trial of the three teenagers, Mohamed Abdennabaoui, the criminal affairs and pardons director at Morocco’s Justice Ministry said that “their sentence will be educational at most, in my opinion,” according to Al Jazeera.

The detention of the three teens stirred controversy with a majority of Moroccans calling for their release and urging the government to focus on fighting corruption and providing employment opportunities to the youth.

After kiss-ins were held in different places calling for the release of the detained kids from Nador, many have turned to Twitter in an attempt to show support for them.

In response to a lawsuit filed by Faysal al Marsy, President of the United Organization for Human Rights and Public Freedoms, the teenagers from the northeastern city of Nador were arrested on Oct. 3 for violating public decency by posting a photo of them kissing, and were held at a juvenile detention center for six days.

The trio was released on bail on Oct. 7, but they are due to appear in court on Friday. They face up to two years in prison.