Riga- Not long after midnight, Latvia's prime minister will do what many do every day -- withdraw money from a Riga bank machine. But for the first time, euros will shoot out instead of tiny Latvia's beloved lat. 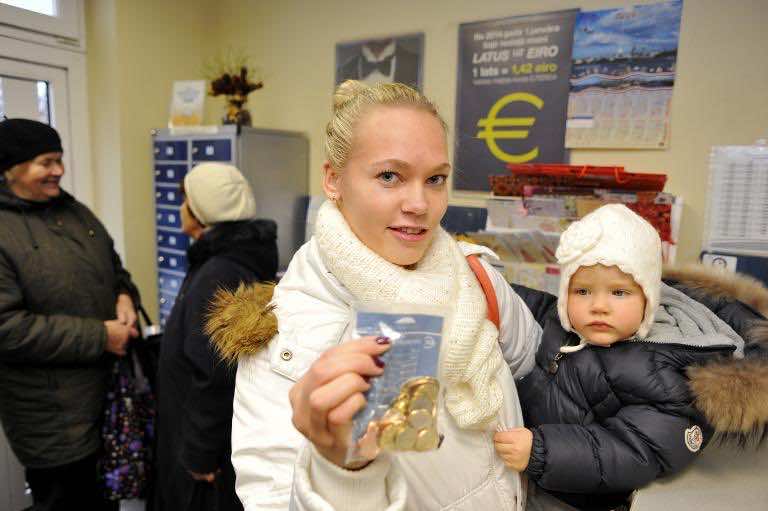 Riga- Not long after midnight, Latvia’s prime minister will do what many do every day — withdraw money from a Riga bank machine. But for the first time, euros will shoot out instead of tiny Latvia’s beloved lat.

Overhead, fireworks will herald not only the New Year but the Baltic country’s formal entry as the 18th member of the eurozone.

But only a quarter of Latvians will go wild with applause, an SKDS poll this month shows, while half the nation cringes with fear and annoyance over Latvia’s second currency change in as many decades.

“Let’s just get it over with. I’m tired of hearing about the euro 24 hours a day,” said 24-year-old student Dace Jaunkalna.

The vocal “No Euro” group fears the money will become yet another “master” after seven centuries of foreign domination before Latvia won independence in 1991 from Soviet tyranny — and the ruble.

Even Latvians glad about the change concede they’ll miss their hard-won lat — adopted in 1993 and pegged to the euro in 2005 a year after Latvia joined the EU.

“Overall it’s probably a good thing but I must confess that I’ll really miss the lat,” designer Agra Apele, in Riga for the holidays from her home in euro-using Finland, told AFP.

Some see it as almost remarkable that Latvia even made it into the eurozone club, given its sharp economic setbacks and a nagging reputation as an easy-access tax haven — and even a money-laundering hub.

But European Commission President Jose Manuel Barroso praised the country’s “impressive efforts and the unwavering determination” as he welcomed Latvia into the eurozone.

After embracing the free market with hefty economic growth in the decade after independence, the Baltic Tiger took a beating in the 2008-9 global economic crisis, suffering one of the worst recessions in the EU as its economy shrank by nearly a quarter.

Prime Minister Valdis Dombrovskis — who has deftly steered Latvia towards the euro — orchestrated a 7.5 billion-euro international bailout to avert bankruptcy but at the price of deep austerity cuts.

In 2011 and 2012, Latvia posted the EU’s top growth rate at five percent — amidst the deep eurozone crisis — with growth in 2013 expected to reach four percent.

When the prime minister withdraws his euros during a midnight ceremony at the downtown Citadele bank, Latvia’s largest, his Estonian counterpart will stand by his side.

The Baltic neighbour, the first ex-Soviet state to join the eurozone in January 2011, saw inflation leap five percent that year — a situation that has fuelled fears in Latvia.

The European Central Bank targets inflation at near 2.0 percent.

“Everyone expects prices will go up in January,” Leonora Timofejeva, a 56-year-old who earns the minimum wage of 200 lats (284 euros per month, $389) tending graves in a village north of the capital Riga, told AFP.

The government’s massive campaign to push the euro has had mixed reception.

“Most people are against euro adoption, but this isn’t the first time a government has acted without asking the people what they think,” she told AFP.

But pensioner Maiga Majore felt “it can only be a good thing”.

“To be part of a huge European market is important. All this talk about price rises is just alarmist,” she said.

Both lati and euros will be legal tender for the first 14 days of the new year before the lat is dropped.

Latvia’s southern Baltic neighbour, Lithuania, wants to pocket the euro in 2015, but is expected to hold off while the eurozone sorts out its debt crisis.

The currency switch was to have crowned Dombrovskis’ efforts, but he quit following a roof cave-in at a Riga supermarket that killed 54 people in November.

His successor will likely be chosen in January.