Bamako - Strengthening cooperation between Morocco and Mali was the focus of a high-level meeting which kicked off Wednesday in Bamako, with the participation of several ministers, officials, business leaders, and representatives of the public and private sectors of both countries. 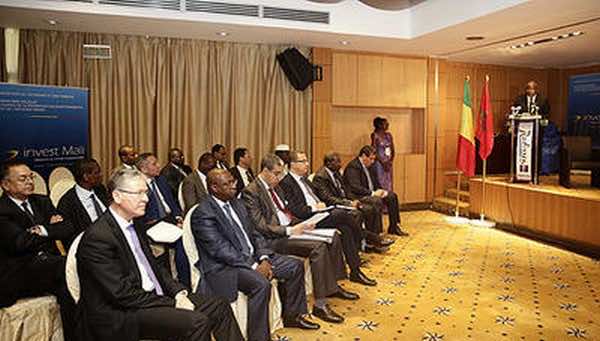 Bamako – Strengthening cooperation between Morocco and Mali was the focus of a high-level meeting which kicked off Wednesday in Bamako, with the participation of several ministers, officials, business leaders, and representatives of the public and private sectors of both countries.

This high-level forum, held part of the visit of King Mohammed VI in Mali, aims to explore ways to establish fruitful and multifaceted partnerships, and promote a new impetus to trade and investment between the two countries in various sectors.

Minister of Industry, Trade, Investment and Digital Economy, Moulay Hafid El Alamy, emphasized the historical ties binding the peoples of Mali and Morocco, and the interest of the King in the Malian people.

For her part, chief of the General Confederation of Moroccan Businesses (CGEM ), Meriem Bensalah Chaqroun stressed that Morocco, under the leadership of King Mohammed VI, has introduced bold ambitious programs and measures to embark on the path to modernity and growth.

Malian Minister-delegate in charge of Investment Promotion, Mustapha Benbarka welcomed the meeting, which demonstrates the commitment of both countries to move forward towards successful and diversified cooperation.

For his part, Chairman of the National Council of Employers of Mali (CNPM), Mamadou Sidebe, praised the interest and care of King Mohammed VI vis-à-vis Mali, adding that it is the duty of two organizations (CGEM and CNPM ) to turn into a reality this mutual interest expressed by both countries.