Casablanca - Artists may sometimes resort to anything to stir controversies and draw more attention to their works.

Casablanca – Artists may sometimes resort to anything to stir controversies and draw more attention to their works.

Katy Perry’s music video for “Dark Horse” has infuriated Muslims around the world for depicting a “God pendant” being burnt.

Katy Perry, who plays an empress-like figure in the video, turns a man, who’s wearing a pendant that reads “God” in Arabic, into sand by striking him with a lightning.

The predominant theme of the music video seems to be ancient Egypt. However, the video is full of absurdist images and symbols, ranging from animal-human hybrids to a dog walking on its hind leg.

An online petition launched by Muslims around the world calls for the removal of Katy Perry’s “blasphemous” music video from Youtube.

“At 01:15 into the video Dark Horse; a man is shown being burned, whilst wearing a pendant (also burned) forming the word ‘Allah,’ which is the Arabic word for God,” reads an excerpt from the petition. 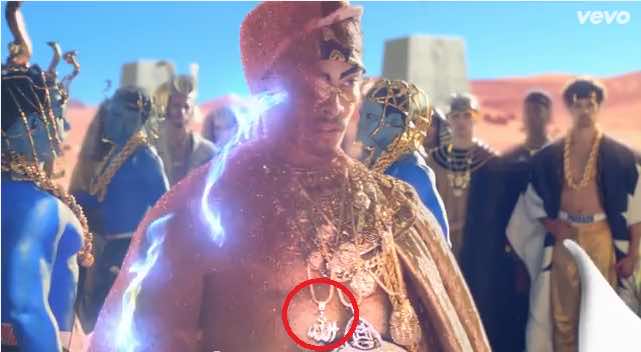 “This is the reason for lodging the petition so that people from different walks of life, different religions and from different parts of the world, agree that the video promotes blasphemy, using the name of God in an irrelevant and distasteful manner would be considered inappropriate by any religion,” it added.

At the time of writing, 37.241 people have signed the petition, whereas 12,759 supporters are apparently still needed.

The petition was launched by Shazad Iqbal from Bradford, United Kingdom. The initiator of the petition calls on Muslims and adherents of other faiths to sign it.

Will this petition push Youtube to ban Katy Perry’s video from its website, or will it be overlooked just like other petitions launched for similar purposes?