ALGIERS - Ten people arrested during deadly sectarian violence in Algeria's desert city of Ghardaia were jailed on Tuesday for up to 18 months for "unlawful public gathering", national media reported. 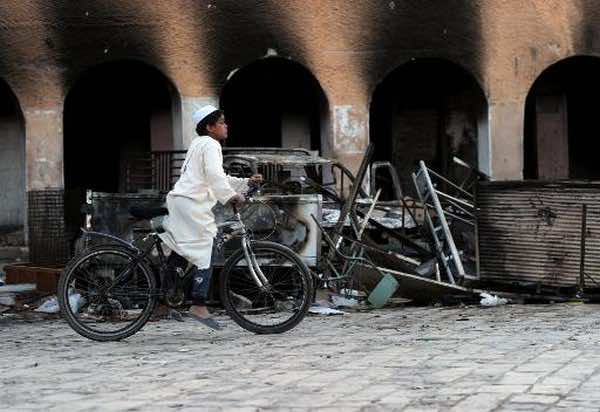 ALGIERS – Ten people arrested during deadly sectarian violence in Algeria’s desert city of Ghardaia were jailed on Tuesday for up to 18 months for “unlawful public gathering”, national media reported.

Clashes broke out last week between young Mozabites, indigenous Berbers belonging to the Ibadi Muslim sect, and members of the Arab Chaamba community, leaving three people dead and some 200 wounded.

The criminal court in Ghardaia, 600 kilometres (370 miles) south of Algiers, handed the 10 accused sentences ranging from three to 18 months and gave suspended sentences to another five, the APS news agency reported.

They were all arrested after the bloody clashes erupted between the rival communities, in which shops and houses were looted and torched.

The authorities have sought to respond swiftly to the latest wave of violence to rock the city on the edge of the Sahara since December.

During a visit on Sunday, Interior Minister Tayeb Belaiz, accompanied by newly-appointed premier Youcef Yousfi, pledged an investigation to find those responsible for the deaths of the three young Chaambas.

Autopsies found they were killed with metal objects, according to the public prosecutor in Ghardaia.

Almost a week after the latest outbreak of violence, schools, shops and public offices remained shut in the city centre and surrounding neighbourhoods, with police reinforcements patrolling the streets.

The two communities in Ghardaia, which is a UNESCO world heritage site, have coexisted for centuries.

But in recent years land disputes and limited economic opportunities, despite the proximity of Algeria’s vast oil and gas wealth, have aggravated social tensions.