GHARDAIA - Despite the deployment of 10,000 security force members, schools and shops remains shut in Ghardaia, a once-popular tourist destination in central Algeria on edge after days of deadly sectarian violence. 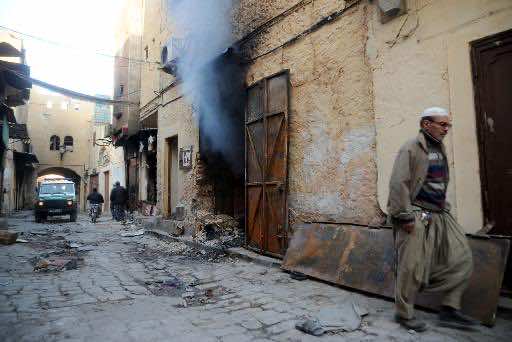 GHARDAIA – Despite the deployment of 10,000 security force members, schools and shops remains shut in Ghardaia, a once-popular tourist destination in central Algeria on edge after days of deadly sectarian violence.

The unrest, which first began in December, has now claimed at least seven lives.

It pits indigenous Berber Mozabites who belong to the Ibadi Muslim sect against members of the Arab Chaamba community.

In a bid to restore order, 10,000 police and gendarmes were deployed around the city’s main streets on Wednesday, a senior security official said, while helicopters flew overhead.

Gharadaia, located in the M’Zab valley on the edge of the Sahara desert, some 600 kilometres (370 miles) south of Algiers, is a UNESCO world heritage site renowned for its traditional white-washed houses and bustling market, selling jewellery, carpets and leather.

The region’s two communities have coexisted for centuries, but rising sectarian tensions were inflamed by the destruction of a historic Berber shrine in late December.

A decision to reduce the security reinforcements 10 days ago is considered a key factor behind the latest outbreak of violence.

Business was virtually at a standstill on Wednesday in parts of the city rocked by the unrest, with the fear of further unrest prompting some shopkeepers to take advantage of the police presence and empty their stores.

Sporadic clashes have continued in some of the mixed neighbourhoods, notably Hadj Messaoud, where three young Chaambas were killed on Saturday evening, and where residents of the two communities have barricaded themselves in.

The victims were buried on Monday, with thousands taking part in the funeral procession and the imam pleading for tolerance and unity, urging the community not to take revenge.

But for some of the bereaved families, obtaining justice is a priority.

“What we want is the death of our son’s killer,” said Taleb Ahmed Abdelaziz, 70, a demand echoed by other relatives.

“Justice requires that the murderer is executed within the framework of the law,” said the victim’s aunt.

During a visit on Sunday, Interior Minister Tayeb Belaiz, accompanied by newly-appointed premier Youcef Yousfi, pledged to find those responsible for the killings.

Another of the victims’ parents, Ali Bekai, pleaded for peace between the warring factions, saying he hoped his son’s death would “extinguish the fire between the brothers of the region”.

“We are against ‘fitna’ (sedition) and separatism, and we are ready to sacrifice what is dearest to us for the stability of Algeria,” he said.

A senior representative of the Chaambas, Bouameur Bouhafs, said he saw “no solution” to the communal violence in Ghardaia, where land disputes and limited economic opportunity have aggravated social tensions despite the proximity of Algeria’s vast oil and gas wealth.

He described his community as “the wood used to light the fire of sedition,” and called on “those who started it to put it out.”

“We need things to calm down so that we can sit round the table and hold talks with the Mozabites,” said Bouhafs, who refused to meet a Berber delegation on Sunday during the prime minister’s visit.

The ongoing tensions kept schools shut for a seventh day, and could require the heavy security presence to remain in place ahead of Algeria’s presidential election on April 17.

A Mozabite mother in Ghardaia, who would only be named as Aissa, said her daughter was afraid to go back to school after getting caught up in fighting that broke out there last week.

“She was shocked by what happened, and refuses to return. This is her last year at school, how can she concentrate on her studies in these conditions?”