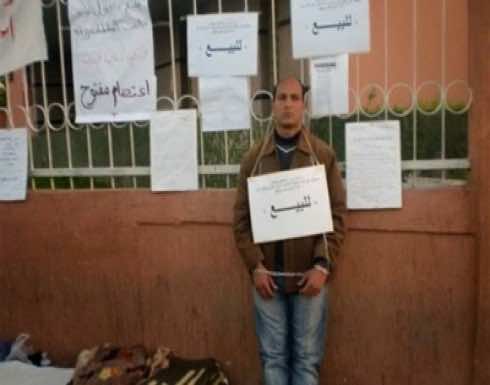 By
Aziz Allilou
-
Aziz Allilou is a student at the Higher Institute of Media and Communications (ISIC) and Morocco World News correspondent in Rabat.
Mar 24, 2014
Spread the love

Rabat- After spending half a month in a continuous sit-in,a Moroccan citizen offered himself up for sale on Saturday at “Almassira”yard in  Beni Mellal, Morocco.

In an unprecedented and unusual move, a Moroccan citizen staged a new sort of protest against worsening social conditions in Morocco and his inability to make an adequate living to provide for his small family by offering himself up for public sale.  The man hung a sign around his neck and posted banners on the fence behind him saying “For Sale” in Arabic.

According to Akhbar Alyaoum, the man, identified as Mustafa Bouadoud offered himself up for sale in “Almassira’’yard, downtown in Beni Mellal city, after the local authorities refused to find a solution for his harassment case.

Mustafa Bouadoud was a street hawker, selling merchandise in “Almassira”yard before the local authorities seized his goods, the family’s only money source.

According to the same source, Bouadoud, the father of athree-year old daughter, complained about being assaulted by the local commander of the fifth district in the city. He claimed that the commander constantly assaulted him and seized his goods every time he came to the yard.

“The commander’s assaults reached the degree of breaking into my small house where he insulted me in front of my daughter and my wife,” Mustafa complained.“I considered this act an excessive use of power,” he concluded.

Offering himself up for sale came after Bouadoud had already carried out two forms of protest, starting with a hunger strike that lasted for 48 hours, followed by an open  sit-in along with his wife and his daughter.

In a statement to Akhbar Al Yaoum, Bouadoud explained that he is “fed up” with the authorities ignoring his plight.  “I am ready to engage in new forms of protest to escalate the situation in the event that I don’t receive any response from the local authorities.”