New York - The UN Secretary General released his annual report on the “Situation in the Western Sahara” on Thursday. The much-anticipated report, which will constitute the main reference for Security Council members in drafting their annual resolution on the Sahara, was somehow balanced. 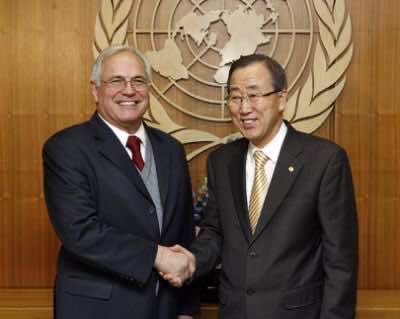 New York – The UN Secretary General released his annual report on the “Situation in the Western Sahara” on Thursday. The much-anticipated report, which will constitute the main reference for Security Council members in drafting their annual resolution on the Sahara, was somehow balanced.

Unlike last year’s report, Ban Ki-moon did not make a clear recommendation on the need to extend the mandate of the United Nations Mission for Referendum in Western Sahara (MINURSO) to include a human rights monitoring mechanism.

Further, in this year’s report the UNSG praised the efforts made by Morocco to address human rights concerns in the territory, and its “cooperation with the Special Procedures of the Human Rights Council,” while expressing his “satisfaction” with the steps taken by Morocco, such as those related to the National Council for Human Rights (CNDH) and the military tribunals.

Nevertheless, the UN chief made a statement that I find troubling. “The end goal nevertheless remains a sustained, independent and impartial human rights monitoring mechanism, covering both the Territory and the camps,” he said.

What is troubling about this statement is that it shows that the United Nations is deviating from its core mandate, which is finding a long-lasting and mutually acceptable political solution to the conflict, where none of the parties comes out as a loser.

This statement makes one wonder whether the United Nations is really seeking to bridge the gap between Morocco and the Polisario in order to find a final solution to this territorial dispute, or its goal has become simply to establish a human rights monitoring mechanism in the Sahara and the Tndouf camps.

Every observer of the question of the Sahara is aware that the question of human rights has been used by Algeria and the Polisario in order to thwart Morocco’s attempts to find a political solution to the conflict based on the spirit of compromise and a win-win approach.

The question of human of human rights is used by the Polisario, Algeria and their allies to weaken Morocco’s position vis-à-vis the international community and make it look as a country that “occupies” a territory and “abuses” the human rights of it population. The objective of this approach is surely not to reach a political solution to the conflict, but to adopt a politicized approach that would supposedly favor a party to the detriment of the other, with the ultimate goal being to allow the Polisario to establish an independent state in the Sahara.

To publicize their claim and garner the support of the international public opinion for the establishment of a human rights monitoring mechanism in the Sahara, Polisario supporters have been hammering over and over again at the claim that MINURSO is the only UN mission without such a mechanism. Kerry Kennedy and Javier, among the most vocal supporters of the Polisario, in addition to a number of human rights organizations, have been touring the world and claiming that MINURSO is the only UN mission that is not provided with a human rights monitoring mechanism.

By buying into the argument used by those who support the separatist claims of the Polisario, the United Nations would be simply deviating from its core mandate and favoring the interests and approach of one party to the detriment of the other. Yet the mandate of the United Nations as a broker is to help bridge the gap between Morocco and the Polisario and pave the way towards finding a political and mutually acceptable solution to the conflict, in line with relevant Security Council resolutions adopted since April 2007.

Even if the international community is seeking to uphold human rights in the Sahara and the Tindouf camps, which itself is a commendable effort, this highly politicized question should not turn into an end goal per see, but only into one of the tools likely to promote confidence building between the two parties and bridge the gap between them.

Yet it is obvious that the question of human rights is not used by those who advocate it to bridge the gap between Morocco and the Polisario nor will it help promote confidence building between them. The ultimate goal of this approach is to use the human rights mechanism in the Sahara as a stepping stone towards bringing the Sahara conflict under Chapter VII of the United Nations Charter, which will then preclude any political solution.

As I have explained in my previous articles, if the United Nations is seeking to help the two parties to find a political solution to the conflict it has to be clear about what approach to take. If the end goal is a political solution, then any approach that may be used for political purposes or that deviates from the UN’s core mandate should be avoided.

In addition, if it were to put an end to this crisis, the United Nations ought to take the reality on the ground and deal with the conflict with a realistic approach that is adapted to the changing realities of the second decade of the third millennium. The United Nations cannot keep trying to apply to nowadays conflicts the same outdated approach that was applied in the 1960s.

If the United Nations is serious about finding a political solution to the Sahara conflict and promoting stability in North Africa and the Sahel regions, then it needs to reconsider its approach and throw  its weight behind efforts helping the two parties to iron out their differences in order to reach such a political solution.

To achieve this, the end goal of the United Nations should not be the establishment of a human rights monitoring mechanism in the Sahara or holding unfruitful meetings between the parties to the conflict. UN officials have to keep in mind that their core mission is to promote international peace and security, rather than promoting the creation of micro states that would provide a fertile ground for instability and chaos in the region and the world.