Marrakech - Morocco’s  industrial strategy has made textiles a priority. Five projects are underway and agreements have been signed. These include an investment by Paris Texas in die finishing, printing and dyeing for MAD 101 million, Sefita is investing MAD 100 million in finishing and dyeing rooms. Plastima is investing in technical equipment for the textile industry with an investment of MAD 80 million. 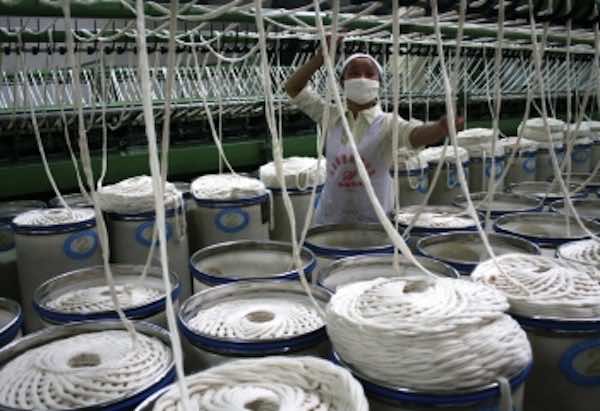 Marrakech – Morocco’s  industrial strategy has made textiles a priority. Five projects are underway and agreements have been signed. These include an investment by Paris Texas in die finishing, printing and dyeing for MAD 101 million, Sefita is investing MAD 100 million in finishing and dyeing rooms. Plastima is investing in technical equipment for the textile industry with an investment of MAD 80 million.

Moulay Hafid Elalamy, Minister of Industry, Trade, Investment and Digital Economy, wants to raise the contribution of industry in GDP from 14% to 23% by 2020 and create 500,000 manufacturing jobs. The Minister has called for increasd job creation and value added and is pursuing a policy of developing productive eco systems and groupings of industry sectors.

This has already been successful in the automotive industry which has overtaken the textile industry in the amount earned by exports. Shipments of vehicles rose to MAD 2.97 billion in the first three months of 2014, an increase of 43% over 2013, and the aviation sector has also seen a rapid increase of 5.9%.

Can Morocco’s textile industry  rise to the challenge of competition, especially from China and Turkey?

The industry creates more than 175,000 jobs and exports about MAD 31 billion. The Minister has expressed confidence in the Moroccan textile industry’s ability to face and overcome challenges. He emphasized the need to focus on job creation and value.

The days when companies like Courtaulds and Dewhirst employed thousands of textile manufacturers vanished because of global competition, but Morocco’s textile industry has indeed survived despite very strong competition.

The need to merge and rationalize the Moroccan textile industry has been recognized by the textile association AMITH  which also recognizes a strategy was needed to penetrate global markets despite tough completion.

One factor that has always been to Morocco’s advantage is its proximity to Europe, and the other is the relatively lower wage costs and the natural skill and dexterity of its workers, the majority of whom are women. It is not easy to invest in new equipment during a global recession but the recently signed agreements are doing just that.

The industry has changed and is now responding to the needs of the fashion industry and what is termed “fast fashion” where fast turn round times and  delivery are required. Zara for example prefers small producers with a very short delivery deadline, favoring the geographical proximity of very active partners with production deadlines, sometimes as short as eight days between ordering and completion.

Morocco is the main supplier to Inditex (owner of Zara and Massimo Dutti). However, short turnover business can leave them vulnerable to unexpected crises. The American market remains very important for Moroccan textiles and garments and is aided by the free trade agreement between the two countries.

Turkey in particular has made a great success over providing readymade garments for “fast fashion,” and it did this by a massive investment in state of the art textile machinery.

It is instructive to take a look at how the fashion industry has developed in the United Kingdom despite the recession. The fashion industry contributes £21 billion annually to the UK economy according to the  ‘Value of the UK Fashion Industry’ report commissioned by the British Fashion Council. London Fashion Week sees orders for £100 million each season and despite the recession, British shoppers spend almost £55 billion a year on fashion garments in the high street.

In total, approximately 816,000 people work in the UK fashion industry. Sales of UK designer fashion have risen by around 20% a year in the last decade and currently sit between £2.5 and £2.9 billion. Britain is the third largest fashion market after Germany and Italy.