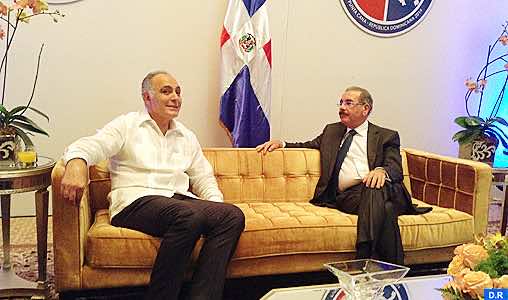 In a statement to MAP, Mezouar, who represents Morocco at the 43rd Summit of Heads of State and Government of the Central American Integration System (SICA), said the meeting with the Dominican president confirms the special relations between the Dominican Republic and Morocco, according to the will of King Mohammed VI to further strengthen them.

He added that the talks also focused on the relations of cooperation between the two countries, and ways to develop them in areas of common interest, particularly with regard to the implementation of the fisheries agreement which will be adopted at the current session of parliament.

Mezouar said that the two countries agreed, during this meeting, which took place in the presence of Ambassador of Morocco in Santo Domingo, Hussein Ibrahim Moussa, to send a Dominican delegation to Morocco to learn from the Moroccan experience in the field of microfinance, establish partnerships with Moroccan businesses, and to grant scholarships to Dominican students in the Moroccan institutes and universities.