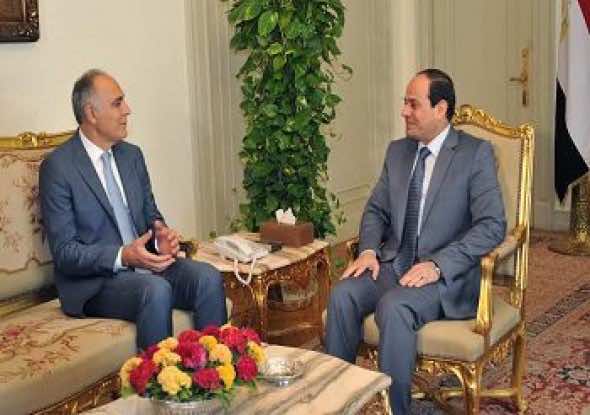 During this meeting, Mezouar conveyed the greetings of the King to President Al-Sissi and His wishes for further progress and prosperity to Egypt, expressing the full support of the Sovereign for Egypt to achieve stability and prosperity for the Egyptian people.

On this occasion, the Minister expressed Morocco’s will to bolster bilateral cooperation and strengthen the privileged relations between the two countries through speeding up the process to hold the High Joint Commission, and strengthening the role of the private sector in Morocco and Egypt in order to lay the foundations of an exemplary partnership.

For his part, president Al-Sissi tasked Mezouar to convey his greetings and esteem to the King, welcoming in this regard the progress made by Morocco in the economic, political reforms, and the stability of the Kingdom during the reign of King Mohammed VI.

Al-Sissi also praised the active role of Morocco on the African and international levels, stressing that Egypt considers the Kingdom as a key partner on the international and regional levels.

The two officials also discussed various issues of common interest, the latest developments in the region, including Syria, Iraq and North Africa, as well as the security challenges in the Sahel-Saharan region, and the need to coordinate efforts to address extremism and terrorism.