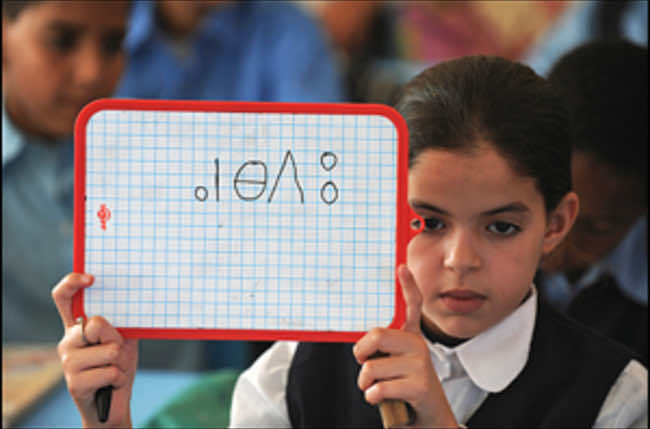 The University of Ibn Zohar in Agadir was the first university in Morocco to integrate the Amazigh studies in the education system. The Amazigh department consists of an undergraduate program, a Master’s program, and doctoral program. The undergraduate program aims at teaching students the basics of Amazigh studies, conducting research and surveys on the Amazigh language as well as studying its socioeconomic and sociocultural environment. The program is a module system. The students have to take four modules each semester and the whole program is six semesters.

The course subjects range from history and linguistics to culture. The Master’s program aims at introducing pedagogical tools that can help students and researchers conduct significant studies of the Amazigh language and culture. The mastering of the language is also another goal of this program, and it offers students the opportunity to study different Amazigh dialects and varieties. It provides students with the necessary tools for cultural mediation, translation, and teaching of the language in both high school and at the college level. Until now, there has been no doctorate program in Amazigh studies; however, university officials and academics are working on a project to integrate Amazigh studies into doctorate programs.

Unfortunately, the implementation of Amazigh studies in Moroccan universities is still limited due to many factors that hinder its complete integration into the curriculum. Along with the insufficiency of pedagogical tools, the lack of resources, and the bureaucracy of the Ministry of Education, the lack of qualified human resources is a big challenge to the development of the departments of Amazigh Studies.

The fuzziness of the objectives of these departments is another serious challenge to its continuity. Until now, the studies offer only theoretical courses to students of the department. This pedagogical limitation needs to be remedied very soon because students after graduation face the bitter reality of the lack of positions that are linked to the domain of their specialty. The absence of the doctorate research and laboratory is also another factor that limits the number of the enrolled students in the department.

Teaching all courses in French is also a real problem that should be resolved immediately. The fact that courses are taught in French raises questions and has caused skeptics to accuse the departments of being guardians of French interests in Morocco. This has legitimized to some extent the claims of Arabophones that the programs are a racist scheme that threatens national unity.
The lack of communication between the departments of Amazigh language in Moroccan universities reduces the rate of gradual integration of the Amazigh language and culture into the curricula. The lack of the cooperation between the Ministry of Education and the IRCAM also shackles the efforts of academic officials to improve the conditions conducive to the teaching of Amazigh.

Today, Amazigh studies is a specialty in some Moroccan universities; however, the mere creation of departments of Amazigh Studies has not yet reached the objectives nor provided the expected results. Decision makers should redouble their efforts to reach the goal of widespread teaching of Amazigh language and culture.