New York - The Moroccan people and international observers were somehow taken aback by the tone of King Mohammed VI’s speech at the general debate of the 69th session of the United Nations General Assembly, which was read out by Abdelilah Benkirane, head of the Moroccan government. 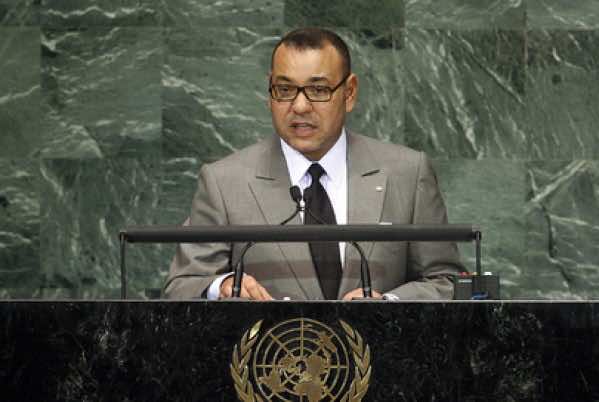 New York – The Moroccan people and international observers were somehow taken aback by the tone of King Mohammed VI’s speech at the general debate of the 69th session of the United Nations General Assembly, which was read out by Abdelilah Benkirane, head of the Moroccan government.

The speech was unprecedented in its denunciation of the deleterious effect of colonialism on developing countries, especially in Africa whose riches were squandered and exploited for several decades, but for also sowing the seeds of division, strife and discord between neighboring countries.

In addition to criticizing the ready-made solutions prescribed by the West for addressing the many social and economic problem facing developing countries, which in many cases have failed to deliver their desired results, King Mohammed VI pointed out that the divisions caused by colonialism among neighboring countries are among the main hindrances towards the achievement of sustainable development in the African continent or in a country such as Morocco.

He also slammed Western countries’ lip service paid to the suffering of African countries and their tendency to impose on them harsh conditions in order to obtain financial aid, while pointing out the West’s disregard of the path chosen by developing countries to achieve democracy.

Many considered the speech as an attempt by the King to project an image of himself as a champion for Africa, especially considering that the speech comes after the efforts he has been making in recent years to give Morocco its due place in African politics, through his repeated official visits to some African countries and his personal involvement in the Malian crisis.

It is clear that, through his speech, the Moroccan king sought to play a leadership role in Africa, which is consistent with the traditional role Morocco has played throughout history in the continent both at the economic level, being a centerpiece in the caravan routes between Africa and the rest of the world, or at the religious level, since Morocco played a pivotal role in the spread of Islam in several countries. At the political level, Morocco was among the founding fathers of the African Union, formerly known as the Organization of the African Unity, which it left in 1984.

Aftermaths of Colonialism on Morocco’s Development

That being said, one of the key messages included in this speech is that Western countries cannot be true to the principles they preach to countries such as Morocco if they do not acknowledge and take responsibility for their colonial past and admit that the territorial and ethnical divisions caused by colonial powers are the main obstacles to the achievement of development, stability and security in these countries.

In the case of Morocco for instance (and this was in my opinion a key message in the King’s speech), sustainable development and security cannot be achieved in a country while it is still suffering from the pernicious consequences of colonialism.

Being one of the few countries whose territorial integrity was torn apart during the colonial period, Morocco is still suffering the aftereffects of colonialism. The situation of the ‘Western Sahara’ is a case in point. This conflict does not only limit the ability of Morocco to play a major diplomatic role at the regional and international levels, but it also constitutes one of the main hindrances towards its achievement of sustainable development, economic growth, job creation and prosperity.

For several reasons, this conflict, which has been stagnant for almost four decades, has had a deleterious effect on the development of the Moroccan economy. For the past 40 years, the Moroccan government has had to battle on many diplomatic fronts in order to defend its sovereignty over the ‘Western Sahara.’ These efforts involve not only the expenses Morocco pays to cover the participation of its diplomatic personnel on different fora that deal with this issue, but also lobbying firms and public relations companies in several key Western countries in order to gain the support of their governments and elected officials, and to counterbalance the propaganda spread by the Polisario and Algeria.

If we assume that in the past 40 years, Morocco spent as little as $10 million dollars every year to cover these expenses, this would amount to $400 million. But far more importantly, the ‘Western Sahara’ conflict cost Morocco a long war against the Polisario from 1976 until 1991. In addition to the security situation in the region and the instability caused by the threat posed by the Polisario front, Morocco has been forced to install the bulk of its army in the territory.

Arms Race Between Algeria and Morocco

This arms race has been a strain on both countries’ economies, and in the case of Morocco, has forced the government to sacrifice some more vital and job-generating sectors in order to keep up with Algeria’s arms purchases. The money that could be invested in education, in improving the country’s infrastructure, in building hospitals and factories, goes to buying weapons that, most likely, will not be used.

The main beneficiaries of this arms race are Western countries, in addition to Russia and China, whose arms industries thrive on the back of developing countries such as Morocco. While these arms purchases boost job creation and exports in exporter countries, it deepens the trade deficit of importer countries and deprives them of the needed financial resources to lay the foundations for job creation and sound economic development.

Because of the arms race between Morocco and Algeria, Morocco’s military absorbs about 10% of the government’s budget. The Ministry of Defense is often among the three top Ministries in terms of overall budget appropriations, along with the Ministry of Education and the Ministry of Interior. For instance, in 2013 the budget allocated to the military represented 12% of the government’s total budget. One can imagine the number of schools, hospitals or factories that could have been built in Morocco with the resulting effect on job creation and the absorption of unemployment.

In general, the reintegration of Western Sahara under Morocco’s de facto sovereignty since 1975 has sucked untold funds from Morocco’s economy. If we assume it has been spending an extra $2 billion per year to buy more weapons and to secure the territory against the Polisario threat, this amounts to $78 billion, more than 5 times Morocco’s external public debt, which stands at about $14 billion.

One can argue that this amount of money would have been sufficient to help the country pay out all its external debt and invest the remaining cash in structural and development projects, with the positive impact that these investments could have on employment, stability and social peace.

In this scenario, Morocco would not have been forced to borrow money from international institutions such as the World Bank and the International Monetary Fund, and, thus, would have avoided the burdensome conditions imposed by these institutions, which have had a negative effect on the country’s economy and social stability.

The impact of the No-Maghreb on Economic Development

Furthermore, the lingering conflict over the ‘Western Sahara’ constitutes the major impediment to the realization of the Maghreb Arab Union, which was established in Marrakech in 1989 but never materialized into a real union.

While others parts of the world witnessed the establishment of regional blocks, such as in Southeast Asia with the ASEAN, and South America with the MERCOSUR, the Maghreb is one of the few regions whose economies are still not integrated. All the ingredients for a successful Maghreb Union are present, from a shared history, language and religion between the people of the region to the complementarity of their economies. In addition, the countries of the region share the same challenges, which consist of a growing population and high rates of unemployment among the youth.

Not only there is no economic integration between the economies of the five countries of the Maghreb (Morocco, Algeria, Tunisia, Libya and Mauritania), but the borders between its two major players, Morocco and Algeria, have been closed since 1994.

According to a number of reports published in recent years about the cost of the “No-Maghreb,” the absence of a real and functioning Maghreb Union costs the countries of the region between 2 and 5 per cent of GDP per year. According to the World Bank, the economic integration between the Maghreb countries could result in an increase in GDP between 2005-2015 of 34% for Algeria, 27% for Morocco and 24% for Tunisia.

The existence of a real Maghreb Union would create a strong block of 90 million people, reinforce political stability in the region and the economic competitiveness of its countries. This would turn the region into an attractive destination for foreign and domestic investors and help the five countries of the Maghreb cope with the challenge of unemployment.

But while the peoples of the region yearn for seeing one day the dream of the Great Maghreb materialize, this goal remains unattainable as long as the question of the ‘Western Sahara’ has not been settled. This goal, along with the goal of sustainable development in the region, remain wishful thinking as long as the international community is not serious about finding a political settlement to this territorial dispute, that would respect the interest of both Morocco and the Saharawi population.

It is time the international community admitted that sustainable development cannot be achieved while some developing countries such as Morocco are still struggling to preserve their territorial integrity, suffering from the aftermaths of colonialism and devoting a huge chunk of their budget to secure this goal.

As the United Nations is making sustainable development its main goal for the nearly two decades to come, there is a need to identify the real impediments that prevent some countries from achieving this goal. And one of these impediments are the aftermaths of colonialism, which left many unresolved territorial disputes, such as ‘Western Sahara.’

Sustainable development and economic growth will certainly not be achieved by means of the credit provided by financial institutions, but through allocating budget resources of these countries to job-generating sectors, which can contribute to economic growth.

It is time the United Nations turned from a machine that churns out countless ineffective resolutions that ultimately have little effect, if any, on the ground, to an effective organization that provides innovative solutions that take into account the changing realities of the 21st century. The international community cannot keep trying to find solutions to 21st century conflicts with ready-made recipes that were conceived in the mid-20th century. The world and mentalities of the 21st century have changed, and the United Nations has to adapt to this reality.