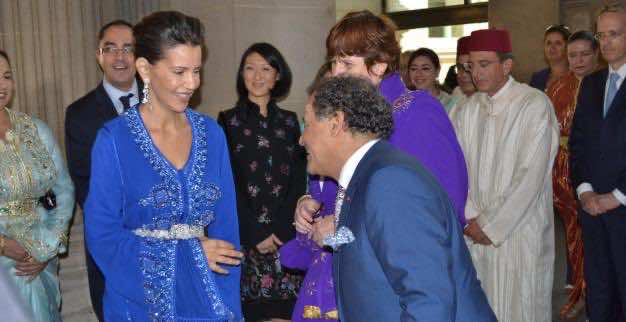 By
map
-
Oct 14, 2014
Spread the love
Paris-Princess Lalla Meryem inaugurated Tuesday in Paris the exhibition “Medieval Morocco: An Empire from Africa to Spain”, organized by the Louvre Museum in partnership with the National Foundation for Museums.
The Princess, accompanied by several figures, visited the different stands of the exhibition, held under the patronage of King Mohammed VI and French president François Hollande.
This traveling exhibition, which will be open to the public from Oct. 17, 2014 to Jan. 19, 2015 at the Louvre Museum, and at the Rabat Mohammed VI Museum form March 2 to June 1, 2015, is an unprecedented event meant to promote culture as an engine for development, knowledge sharing and bringing closer peoples and nations.
It features over 300 works of art reflecting what Morocco has achieved during the Almoravid, Almohad and Marinid dynasties in the fields of architecture, pottery, textile, calligraphy and books. The event displays also scientific and technical inventions and their impact on European Renaissance.
This far-reaching event coincides with the Contemporary Morocco Exhibition which was inaugurated, on the same day, at the Arab World Institute by Princess Lalla Meryem and French President François Hollande.
The Medieval Morocco exhibition displays very symbolic items as minbars (where the preacher stands) and bell lamps of the Al Qarawiyyin mosque which were lent by the Kingdom.
Since the creation of the Idrisid State which is independent from the Mashreq, Morocco chose a moderated Islam based on the Malekite rite and Sufi thinking, these bases make up Morocco’s political and spiritual identity.
This ceremony was attended mainly by president of Louvre Museum Jean Luc Martinez, Culture minister Mohamed Amine Sbihi, Morocco’s ambassador to France Chakib Benmoussa, Morocco’s ambassador to the UNESCO Zouhour Alaoui and palace’s spokesperson and Morocco’s historiographer Abdelhak Mrini.