Columbus, Ohio- In light of the recent tragic climate events that claimed dozens of lives, cost millions of dollars and caused major disturbances to many lives all around Southern Morocco, many questions surfaced as to how prepared was Morocco for such major climate calamity. 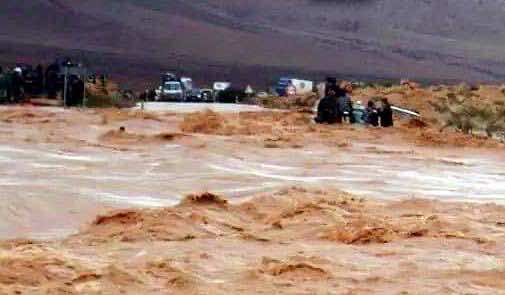 By
Said Leghlid
-
Said Leghlid is a poet, essayist and magazine editor.
Nov 30, 2014
Spread the love

Columbus, Ohio- In light of the recent tragic climate events that claimed dozens of lives, cost millions of dollars and caused major disturbances to many lives all around Southern Morocco, many questions surfaced as to how prepared was Morocco for such major climate calamity.

It is naturally expected that in this electronic age people took to social media to deliver from their angles and perspectives raw footages of how they saw events unfold before their eyes. Citizen journalism characterized by its chaotic nature was competing with the official narration of events. The government sponsored media, which routinely broadcasts its information with measured editorials, protocols and bureaucratic fanfare, to rain in social order, and prove that things were under control, found itself back peddling to prove that it was under control.

This dichotomy between two points of views: One bureaucratic in nature, while the other is arbitrary, unsophisticated and raw. It presents Moroccans, the “consumers” of news, with far better choices than ever before. The tough dilemma of reality is that a lack of trust between the citizens and the authorities tend to flare up ferociously during times of crisis. Social media, in its raw chaotic form is far more credible than other official mediums such as television and radio.

In the case of recent floods, nature exposed the weaknesses of local governments as a result of lack of a choreographed first response to a disaster which proved the government was incompetent and unprepared to tackle the mountains of public health and safety and economic issues that popped out of nowhere, or did it?

To answer this question a short analysis I titled: Lessons Learned in order to breakdown this topic into manageable parts where a clear understanding of what should every citizen know and do when calamities like these strike. I will start with a disclaimer that I am not a disaster relief expert, and do not possess a magic answer to how to physically deal with it. I simply want to shed some light on what could be done to make every Moroccan an active participant in the prevention of loss of lives and property in case of a major disaster such as what we saw this week.

Right or wrong, one of the first victims of a natural disaster is leadership. Instinctively, people are generally the first responders to be present at the scene when a disaster happens. They tend to bravely use all available means to help if they can and when they cannot they sit aside and wait for help by calling the right number for emergency responders.

The second line of defense that assumes responsibility and is automatically charged with taking ownership of the disaster are the local emergency responders, known in Morocco as authorities. If they cannot deliver the necessary help due to lack of equipment and logistics, they will also sit it out, do what they can with the means they have, and escalate to higher authorities.

The chain of command tends to escalate upwards where the domino pieces are expected to push up hard against higher authorities to make things happen. In Morocco, the concentration of executive authority upstream is more complex and is concentrated at the highest levels of authority, because of its political economics and its hierarchy that micro manages priorities via strict chains of command.

The decision making process is limited by the available logistics to intervene in a coordinated and managed fashion. In Southern Morocco, this was the scenario where social order was rendered upside down because of the torrential rains that caused major floods, and the government did not have a plan in place to manage the broad risks the weather presented to people over major geographical locations stretching for a couple of hundreds of miles.

The magnitude of this natural disaster could render the response to it one of the least damaging assessments one can come up with in order to move away from finger pointing, blaming, and scapegoating which are typical of how people deal with natural disasters.

Morocco is no different than many other countries where disaster is part of people’s daily lives whether in hurricane prone areas in the US. All of us remember hurricane Katrina where I had the honor to volunteer in 2005, and the learning experience was touching and mostly vouched for the power of doing and organizing and getting things under control by an army of volunteers with the Red Cross, and a coordinated effort with authorities. One could also mention tsunami ravaged parts of Asia, and volcanoes that threaten people’s lives every day, earthquakes and mud slides in Latin America…etc. The common denominator here is to examine how to prepare and lessen the impact of such natural disasters on the public.

Based on the broader narratives that accompanied countless videos posted on various social media whether the now infamous pictures of two men on an overturned truck that drove over the dangerous waters and lost control, the helpless images of the many young men sitting on the hood of a public taxi before they were swept away to their deaths, the motorcyclist who was swept by the seemingly treacherous waters over a bridge, and who was later found dead, the daring men who were putting their lives in imminent danger while crossing a small bridge under which raging waters could move houses, all those scenes were from different parts of southern Morocco and had one question in common: Could those deaths have been prevented? The lessons learned from the floods of November 2014 could be broken down into three categories: infrastructural, safety related, and educational.

1. Infrastructural: The backbone of every country, infrastructure can tell whether a country is seriously and collectively managing all its resources, or if that country is barely getting by. Over the past decade, Morocco marked few milestones by linking “strategic” demographic cities via a system of highways that mark progress in the right direction. In large cities, the sewage and water drainage systems were built by the French and have not been overhauled to today’s drainage standards.

As we saw in many videos of the floods, zoning issues surfaced as one reason many homes were swept away. Peoples’ memories of floods tends to be short and be replaced with more construction in the same spots where creeks flooded years before. Strict zoning laws should be enforced to save lives and businesses that were built in those potentially dangerous zones. Some type of government sponsored insurance programs to help rural people cope with loss of homes might alleviate their fears of rebuilding are needed.

2. Safety Related: First responders without adequate equipment are no different than bystanders. There was a video of some firefighters hoisting a man down a treacherous ravine with some type of rope into raging waters without a safety vest or any gear that might save his life should he slip out of the rope. The whole scene looked dangerous and telling of the lack of training of the firefighters.Firefighters should be well trained for such disasters and be the professionals one will expect them to be.

First responders are critical to assessing the situation on the ground and making the right call for additional help. They should be empowered to make independent responsible calls for help without bureaucratic interventions. Technology can make that possible where the scene of a major damage can be clearly transmitted to other decision makers.

A coordinated effort of these first responders with others across large geographical regions could prove beneficial and very helpful in sending additional first responders to directly affected regions. So is the help with people who lose electricity, and water…First responders could be made of people from many competencies to rehearse for events like this and work together to prepare for disasters. That to me is an example of an efficient working government where resources could be dispatched between places for better effective responses.

Part of this safety lesson is public transportation: Drivers of Taxis should be re-educated not to take chances with people’s lives in the way they drive. Many are overworked and exhaustion could lead to making poor decisions such as crossing flooded roads and bridges and costing the lives of many passengers.

3. Educational: This is the disheartening part where citizens play a major role. Respect of nature is one of those issues that go unnoticed. People could be educated and warned not to take chances with reckless drivers that decide to cross flooded bridges. Programs to teach preventive first aid courses such as CPR and First Aid should be taught at schools and universities, lifeguard courses should be offered free of charge where there are swimming pools to prevent accidental drowning. Education should start at home and be disseminated through the vast channels available to the authorities.

Redundancies could be built in the system to prevent the domino effect so that if one part fails, it does not drag other parts with it. In the case of torrential rains that devastated Southern Morocco, no meteorology warnings were given to locals to evacuate to higher grounds, seek shelter in safe buildings, and stay clear of water streams in valleys and mountainous regions. I am not sure if a dialogue has already begun on how to tackle another disaster of such magnitude, but positioning Morocco for an eventual natural calamity should not wait for a day later.