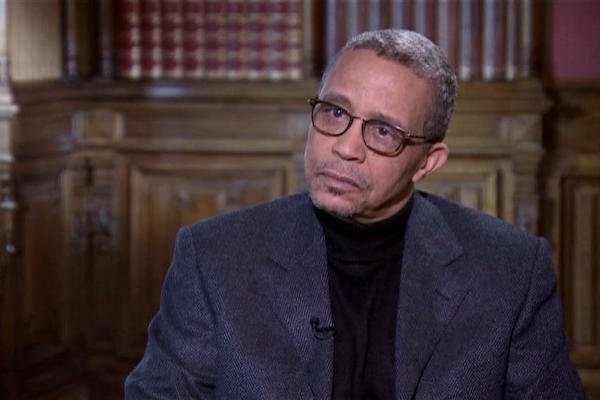 The Kouachi brothers – the gunmen – were born in France to Algerian immigrant parents, but Khadra says discussions of the terrorist’s nationality are irrelevant. “For me, the murder doesn’t have an identity. It doesn’t have a nationality. It is characterised, it is identified by its wrongdoing. So I shouldn’t suddenly have to feel guilty because he’s Algerian. We’ve got to stop making this link that shouldn’t exist between where a murderer comes from and his act. We have to focus on the act, and nothing more.”

Khadra says the Charlie Hebdo attack affected him personally. “I was shocked,” he says. “Even if I’m Algerian, even if I’m from a country where 200,000 people died, where we went through a horribly dark time, we’re still shocked by the attack. Because each organised murder reminds us a little of what we lived through here in Algeria, and it’s natural that no-one can get used to that atrocity.”

Khadra reminds Rowland that Algeria was the first victim of extremist Islamic terrorism, with an armed conflict that began in 1991. “Algeria has lost more journalists than the rest of the world put together, you know?” he says, referring to the assassination of over 70 journalists during The Algerian Civil War. “So I don’t have the right to be Charlie. I can only invite Charlie to join the rest of us. Because we were the first victims, and when Algeria lived through its tragedy, it was completely isolated from the world; no-one was interested, and our heroes were passed off as assassins, as criminals. In the 2000s, they used to say that Algeria didn’t have any terrorists, that it was the military that killed people, and I still pay for having defended the truth.”

“The only way we can fight against this plague is by isolating it,” he argues. “We must isolate it completely from what it is doing; stop associating it with a community it pretends to defend, or a religion it pretends to embody. A god doesn’t need to be defended by mortals. It’s God. How could He appoint mortals – venerable, miserable, poor beings – to defend him? We’re a little in the absurd. We’re living in absurdity at its most impure.”

Khadra says we’re living through “a battle of extremes…  On one side, in France, for example, freedom of speech is sacred. On the other, for all those who believe, religion is sacred. And of course, both are right to defend their values. But both are wrong to impose their values upon others.”

He says that, contrary to the stereotype of Islamic men in the mainstream media and Hollywood, “Most Muslim men are brave, generous, welcoming, they express love, they are brotherly, and I can’t see how one can allow oneself to limit a Muslim nation to a few thousand people who are misled.”

He argues strongly for the importance of multiculturalism. “We’re always scared of multiculturalism – I think it’s the future of humanity. I’m multicultural. I know about Western culture, Eastern culture, Arabic Berber culture, because I’m Berber too. I’m Algerian – and this is how I try to understand my era… I’ve always said in my books, he who lives his life fully is he who knows how to live, who can love a part of each religion and a song from each folklore. And this is how we are really human beings. If not, we stay French, we stay Algerian, we stay Qatari, and we will never know how to be human.”

Khadra also discusses his work, politics, freedom of speech, and why no one wants to listen to the truth today.