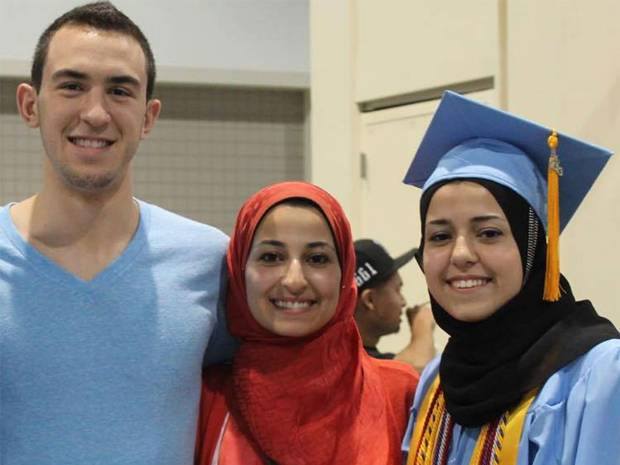 Rabat – Craig Stephens Hicks, 46, was charged with the first-degree murders of three young Muslim students in North Carolina on Wednesday. He is currently being held in Durham County Jail, according to Newsobserver.

The victims were Deah Shaddy Barakat, a 23 year old doctoral student of dentistry at the University of North Carolina at Chapel Hill, his 21 year old wife Yusor Abu-Salha, a student at North Carolina State University who was due to graduate this year with a degree in biological sciences, and her sister Razan Abu-Salha, 19, also a student of NCSU in the faculty of architecture and environmental design.

All three victims were found dead due to gunshot wounds in the apartment of the recently married couple, which is located in a neighborhood that sees little violent crime. According to local WRAL news, the victims had all been shot in the head. The bodies have been sent to the State Medical Examiner’s Office in Raleigh, the capital, for an autopsy, according to Newsobserver.

Although a motive has not yet been established, social media is linking the murders to Islamophobia, with people taking to Twitter to condemn the crime. Newsobserver reported that one Twitter user tweeted, “three Muslims murdered tonight in Chapel Hill, NC by a man because they were Muslim. What a sad night in America.” Others compared the shooting to the recent attacks on the Charlie Hebdo headquarters in Europe, with The Independent quoting Twitter user Zain Khan as saying, “RIP to the three #Muslims murdered. I’d like to see the same public uproar as the “CharlieHebdo aftermath.”

The link to Islamophobia is supported by the texts and images condemning all religions that have been linked to Hicks’ Facebook profile, in which he describes himself as an atheist, according to The Independent.

The victims are being remembered through a Facebook group called “Our Three Winners” as well as the continuation of a project spearheaded by Barakat, called “Project: Refugee Smiles”, which aims to provide Syrian refugees with dental attention as well as support local dental clinics in Turkey. Barakat had been planning on going to Turkey himself to participate in the project.