London - Conditions are set to get worse for the remaining Palestinian refugees in Yarmouk following the takeover of large parts of the camp by ISIS militants. The besieged refugee camp on the outskirts of Damascus, which was once home to 160,000 Palestinians, currently has about 18,000 residents trapped, with limited access to water collected from wells and food, and no electricity. 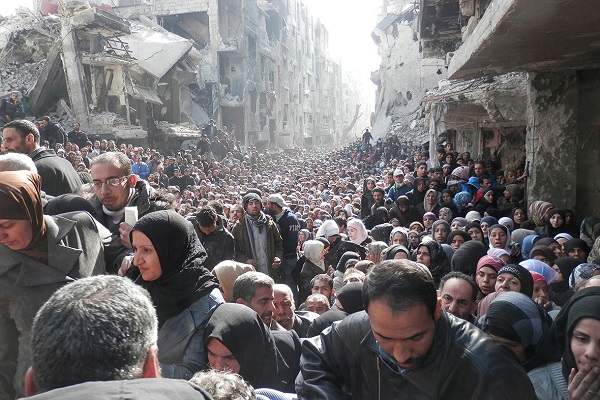 By
Koos Mohammed
-
Koos Mohammed is a freelance writer and a human rights activist based in London.
Apr 2, 2015
Spread the love

London – Conditions are set to get worse for the remaining Palestinian refugees in Yarmouk following the takeover of large parts of the camp by ISIS militants. The besieged refugee camp on the outskirts of Damascus, which was once home to 160,000 Palestinians, currently has about 18,000 residents trapped, with limited access to water collected from wells and food, and no electricity.

Yarmouk first captured the attention of the world when the picture [above] of hundreds of Palestinians queuing for food in a destroyed neighbourhood circulated in the media in January 2014.

During a visit to the camp in early 2014, UNRWA chief Filippo Grandi described the devastation in the camp as “unbelievable” saying, “there is not one single building that I have seen that is not an empty shell by now. They’re all blackened by smoke”.

In what appears to be the latest catastrophe to befall the Palestinian refugees, fighters from ISIS are said to have entered Yarmouk on Wednesday from the southern neighbourhood of Hajr al-Aswad. Gun battle with armed Palestinian group, Bait al-Maqdis, ensued, with witness claims that the al-Qaeda affiliated al-Nusra Front had joined ISIS fighters for the battle for the camp.

A resident in Yarmouk claimed that “one of the main reasons for the clashes relates to the recent arrest of ISIL fighters in the district who were accused of assassinating a leading figure of Bai al-Maqdis”.

Anwar Abdel Hadi, Director of Political Affairs for the Palestine Liberation Organisation in Damascus, told the AFP news agency that, “fighters from ISIL launched an assault this morning on Yarmouk and they took over the majority of the camp” on Wednesday.

Also on Wednesday, Jordan closed its main border with Syria. Jordan’s Interior Minister Hussein Majali cited the closure to goods and travellers as, “preventive measure to safeguard the lives and security of travellers due to the fighting underway on the other side of the border.”