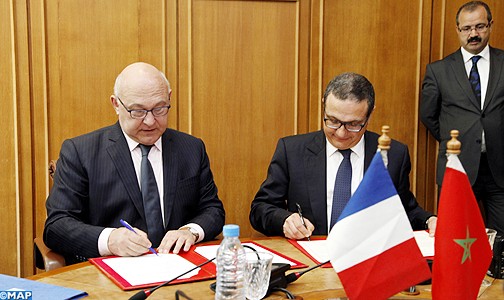 The agreements were signed by Finance and Economy Minister Mohammed Boussaid and France Finance and Public Accounts Minister Michel Sapin who is on a working visit to the Kingdom.

The agreements are signed in implementation of the declaration of intention inked in 2013 between the two countries.

Under the first agreement, 26 million Euros will be earmarked to the French guarantee funds (Fonds de Garantie Français) in supplying French material to Moroccan SMEs as well as to the development of joint French-Moroccan enterprises.

The agreement is meant to increase the pace of business between SMEs in the two countries by facilitating their access to funds .

The second agreement, worth 17 million Euros, pertains to the transfer of funds from the financial restricting guarantee to the SMEs guarantee fund.

This agreement is aimed at reinforcing the Moroccan guarantee system by facilitating funding access to Moroccan SMEs.

Speaking on this occasion, French Minister said that the agreements mirror the new orientation in French-Moroccan economic and financial relations consisting in supporting SMEs.

France remains the main trading partner and donor for Morocco. Half FDI’s in Morocco are French with 750 enterprises operating in the Kingdom employing around 120,000 people.