Rabat - Child marriage is a cultural tradition that still exists in Morocco and in many other developing countries in Latin America, Africa, South, East and West Asia. Child marriage is defined as marriage before reaching the age of eighteen, and it is usually practiced among people belonging to a poor socioeconomic background. Islam also allows child marriages. Once the girl begins menstruation, then she has reached the marriageable age, even if she is less than ten. 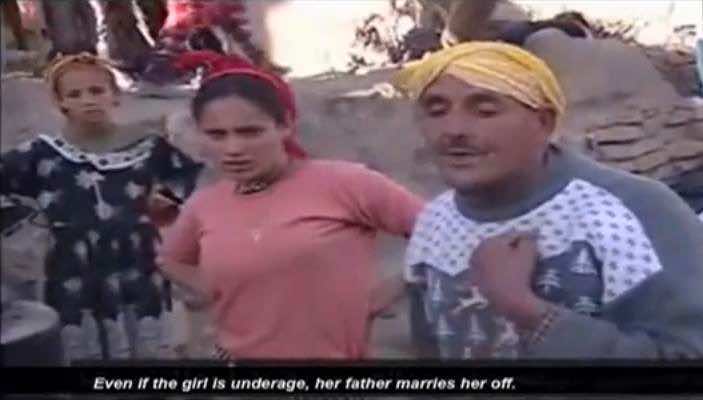 Rabat – Child marriage is a cultural tradition that still exists in Morocco and in many other developing countries in Latin America, Africa, South, East and West Asia. Child marriage is defined as marriage before reaching the age of eighteen, and it is usually practiced among people belonging to a poor socioeconomic background. Islam also allows child marriages. Once the girl begins menstruation, then she has reached the marriageable age, even if she is less than ten.

Nowadays, nobody argues in favor of the negative effects of child marriages. Though child marriage concerns both boys and girls, only girls are negatively affected by this oppressive practice since they are exposed to different kinds of violence. Although social customs allow child marriage, this social phenomenon has to be banned by Moroccan law, because its consequences on girls are very dangerous: it ends a girl’s education, jeopardizes her life, and subjects her to sexual abuse.

In different rural areas in Morocco, child marriage is a common practice that is permitted by religious and social customs that consider the advantages of marrying young couples. On the one hand, Islam encourages reproduction. Therefore, getting married at an early age allows young women to have more children than those married later. Islam permits a young girl to get married if her guardian accepts.

On the other hand, social customs also consider child marriage to be beneficial for the girl and her family. Because girls in rural areas of Morocco have to remain virgins until they get married, their parents agree to marry them at an early age. They believe that by doing so, they protect their daughters from losing their virginity before marriage. Another point is that girls in those regions are not educated and have no income, and their parents suffer from poverty.

As a result, the parents force their daughters to marry in order to secure their economic future life. Also, by the time girls reach the age of twenty, they are not wanted by other men. Consequently, getting married very early saves them from remaining unmarried the rest of their life.

Though religion and society encourage child marriage, married girls suffer from its negative effects after marriage. The first effect of child marriage is ending the girl’s education.

Girls in rural areas of Morocco usually get married at the age of fourteen or fifteen at the oldest, but in some remote areas such as Tamalout, a village located in Midelt, girls get married at the age of seven to a fourteen-year-old boy for one week only. After the week, they go back to their parents until they reach the age of fourteen, when they can join their husbands if the men still want to keep them as wives. If not, the husband has the right to decide to divorce his wife orally in the presence of a fourteen-year-old boy, and then go look for another victim to marry.

So, while these girls are still attending primary school classes, they find themselves housewives before knowing it. The seven days they spend at their husband houses prohibit them from attending their classes. Consequently, they drop out from school because they have to learn the housework, and no one of them imagines the girl will get divorced. Because they are not well educated, most of the girls find themselves pregnant, as they do not know how to use contraceptives. That is why ending a child’s education is like condemning them to a life of misery: no job opportunities are available and therefore no income to support themselves.

The second effect of child marriage is jeopardizing the girls’ life. In some cases, when child brides are less than ten years old, they might die on their wedding night because of internal bleeding and uterine rupture. Childbirth is one of the main causes of death among mothers under the age of eighteen, especially when the teenage mother receives no prenatal care.

The United Nations Population Fund reports that girls less than fifteen are five times more likely to die in childbirth than girls in their twenties. This is due to the size of the girls’ pelvis, which has not developed yet to give birth to a child. Most teenage mothers who survive childbirth suffer from many complications. ‘Obstetric fistula’, internal injuries that happen during childbirth and cause abnormal connection between organs, is one of the consequences of child pregnancy. ‘Pelvic bones’ reach their maximum size at the age of eighteen, and thus the pelvis of a teenage mother has not yet fully developed to allow a safe delivery of a normal-size baby.

Additionally, there is no way for a caesarean section in rural areas. Hence, teenage mothers who give birth suffer for the rest of their life from ‘Fistula’, causing urine or faecal flow. Needless to say that babies born to teenage mothers are likely to die because of the bad conditions of childbirth, or they have a low birth weight because their mothers do not eat properly during pregnancy. Another point is that a teenage mother is still in the process of growing up, so pregnancy makes her suffer from anaemia, blood pressure problems, and vitamin deficiencies, to name a few.

As a result, poverty and illiteracy make teenage wives ignorant of their rights, and subject to sexual abuse by their husband. They engage in forced sexual activities at very young age, and have no background in sexual education. Among the effects of child sexual abuse are anxiety, depression, low self-esteem, post-traumatic stress disorder, and psychological trauma which, in severe cases, push the teenage wife to commit suicide. A case in point is Amina Filali, a girl from Larrach, who at age sixteen was forced to marry her rapist and then committed suicide because of sexual abuse.

Recently, there have been some international initiatives to prevent child marriage. The United Nations General Assembly adopted a resolution in September 2011 that designates October 11 as International Day of the Girl Child.. The United Nations Human Rights adopted a resolution in 2013 against child marriages, and considered such acts as human rights violation.

In Morocco, the legal age for marriage is eighteen, but child marriage is legal if the couple has children. However, Moroccan law considers child sexual abuse a criminal and immoral act, and prohibits sexual abuse through its penal code. Penal code article 467 prohibits forced child labor, and the articles 467 to 499 prohibit forced prostitution and prostitution of a minor. Penalties for forced child labor range from one to three years in prison.

UNICEF stated that child marriage “presents perhaps the most prevalent form of sexual abuse and exploitation of girls”. Thus, child marriage is a violation of children’s rights, and is equivalent to the crime of child sexual abuse. Thus, for all the negative effects of child marriage stated above, this act has to be banned by law in Morocco, and parents who force their daughters to marry at a very young need to be punished, because this act equates to the crime of forcing a minor to have sex with an adult.

Social traditions that shape the institution of marriage under the name of Islam in Morocco should end by all means. Child marriages have no benefits for female child brides. The stigma related to sexual relationships and pregnancy before marriage lead parents to marry their children without their consent.

Poverty is another problem that pushes parents to force their daughters to marry. While parents think they are securing their daughters’ future lives, they actually usher in a sudden end of their childhood, and cause illiteracy and sexual abuse. Sexual activities and childbearing risk the health of young girls, and pregnancy is the leading cause of death for women under the age of nineteen.

Therefore, taking into consideration all these consequences of child marriage, it is a criminal act against children that has to be ended by Moroccan government interference in order to afford a suitable life for Moroccan children.