Morocco World News
Home News Middle-East Yemen Is in a Humanitarian Crisis, Not on the Brink of One

Rabat - The United Nations claims more than 5,700 people have been killed in the conflict in Yemen since March 26, including 830 women and children. 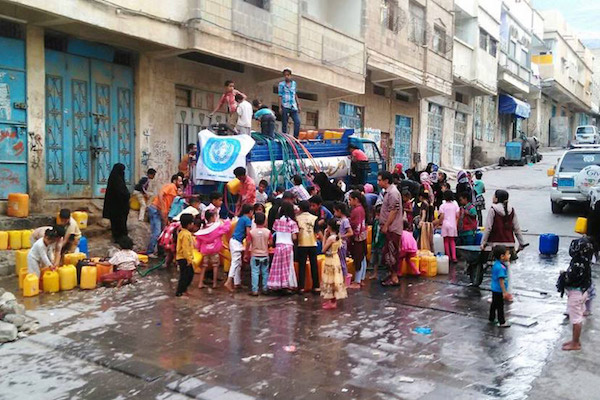 Rabat – The United Nations claims more than 5,700 people have been killed in the conflict in Yemen since March 26, including 830 women and children.

“Overall, essential services are rapidly contracting due to the direct impact of the conflict and insufficient resources to pay salaries or maintenance,” Mr. Van der Klaauw said.

According to Van der Klaauw, about 14 million people lack proper access to healthcare, including three million children and pregnant or lactating women who are in need of malnutrition treatment or preventive services, further adding 1.8 million children have been out of school since mid-March.

“We estimate that over 19 million people lack access to safe water and sanitation; over 14 million people are food insecure, including 7.6 million who are severely food insecure; and nearly 320,000 children are acutely malnourished,” Mr. Van der Klaauw said.

Background to the crisis

The country has been plagued by an ongoing violent civil war since March this year and has worsened over the course of the last several months.

Since the events of 2011, when many Yemenis took to the streets demanding changes, which led to the overthrow of former president Ali Abdullah Saleh, the country has experienced an unstable post-revolutionary era.

However, the Houthi rebels, who want autonomy over the mountainous Sa’dah province near the border of Saudi Arabia, have been waging a low-level war against the country’s government throughout the 2000s. Multiple peace agreements were made and later broken until 2011 when Houthi group capitalised on the uprising against Saleh.

By late March, a Saudi-led coalition began intensive aerial attacks against Houthi forces, many of which appeared to be in violation of the laws of war, according to Human Rights Watch, who called for the US to ban bomb sales to the Gulf country.

On November 18, HRW published a report detailing the use of banned landmines by Houthi rebels.

Believing the figures to be higher, HRW pointed out mines have killed at least 12 people, injured more than nine in Yemen’s southern and eastern governorates since September 2015 alone.

Echoing these concerns, Van der Klaauw explained the humanitarian crisis is further exacerbated by “An almost complete disregard for human life, with indiscriminate attacks against civilians and civilian infrastructure.”

Calling on all parties in the conflict he said: “abide by international humanitarian law and to meet their obligations in protecting civilians and facilitating the provisions of rapid and unhindered humanitarian access.”

One of the world’s poorest countries, the devastating conflict has spread to 20 of Yemen’s 22 governorates and created “a desperate humanitarian situation.”

A basic reduction in commercial imports is causing a dangerously low availability of fuel, food, medicines and other essential commodities.

This has led to cutting of water pumping in a country that has no water. Trucking services and healthcare services and a dramatic increase in food prices along with the availability of less than an hour of electricity in most parts of the country.

According to Van der Klaauw the Humanitarian Response Plan, launched in June to meet the critical needs of more than 11 million people has only received $700 million out of the $1.6 billion needed.

Noting the depletion of basic resources, he urged the international community to relax restrictions on commercial imports, especially fuel, medical supplies and food.