Taroudant - Thousands of people took to the streets in Casablanca on Sunday to protest “the unilateral policy” of Abdelilah Benkirane, Morocco’s Head of Government, and the “deplorable financial conditions” of the working class. 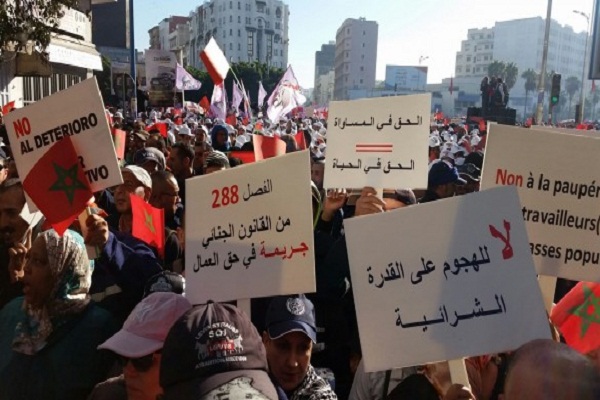 By
Larbi Arbaoui
-
Larbi is a freelance writer and assistant editor at Morocco World News.
Nov 29, 2015
Spread the love

Taroudant – Thousands of people took to the streets in Casablanca on Sunday to protest “the unilateral policy” of Abdelilah Benkirane, Morocco’s Head of Government, and the “deplorable financial conditions” of the working class.

In a press statement, the leader of the UGTM Mohamed Kafi Cherrat claimed that some 350,000 people participated in the march. Moroccan media reported that the number of protesters was less than 20,000 participants.

According to Telquel, some 3,000 teacher trainees, who have been on strike for more than a month, also took part in the march to protest against the governmental’s educational policy.

The protesters hoisted placards with slogans against the high cost of living, pension reform and others, and called for an increase in salaries and the omission of Article 288 from the Penal Code, which criminalizes striking.

The unions also called on the government to establish a participatory approach in reforming the pension system, the implementation of other provisions of the Agreement of April 26, 2011, and opening of sectorial negotiations to reach agreements.

The unions expressed their determination to continue mobilizing the work force, and announced a nationwide general strike in the public service and all sectors on December 10.